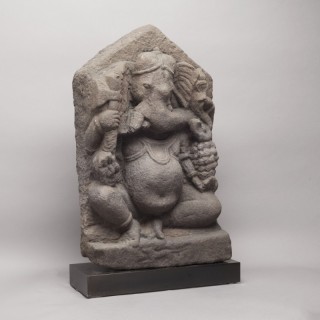 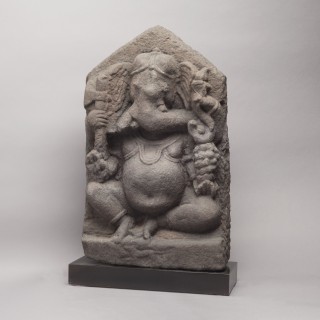 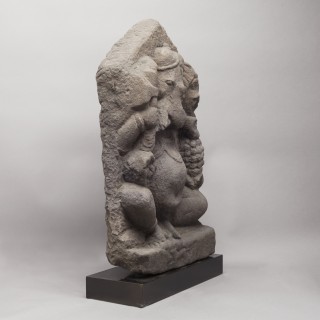 Ganesh is the God of auspicious beginnings, wisdom and prosperity, the remover of obstacles and patron of the arts and sciences. The elephant headed god is shown seated in a relaxed pose holding some of the attributes which define his role as a mediator.
In his rear right hand Ganesh holds the axe or goad, ankusha, with which he prods man to the path of righteousness and truth and in his front right hand he holds his broken tusk – a reminder of the need for humility; one day when his parents were sleeping Shiva’s favourite disciple attempted to visit but Ganesh would not allow him entry. They fought and Parashurama, the disciple, threw his axe at Ganesh who recognised it as a gift from his father and so did not dodge the projectile but, in humility, allowed it to slice his tusk. The sweets which he holds in his left hand symbolise the sweetness that comes with the realisation of the inner self and his huge belly calmly digests both good and ill and swallows the sorrows of the Universe. Probably the most popular story for his elephant head is that his mother Parvati wanted a child which his father as a celibate Brahmin was unable to give her, so she fashioned a child from clay. One day he was guarding the door whilst she was bathing and Shiva came to visit. Ganesh would not allow him entry and so they fought and Shiva cut off his head. Parvati was desolate and threatened to destroy the world so with a great deal of haste Shiva sent for the head of the nearest animal and placed it on Ganesh’s shoulders. In a further attempt to placate Parvati he decreed that Ganesh would be the leader of his ganas or followers. And so Ganesh took his place as the first born of Shiva and Parvati and became the god of auspicious beginnings: in the Hindu procession of Shaiva his likeness is carried first in processions and so every temple requires at least one sculpture of Ganesh.

As with Christian icons of the Eastern Church the portrayal of the Hindu gods requires the artist to follow stringent rules regarding every aspect from posture and clothing to relative dimensions and the relationship of one part of the body to another. However it is in the expression of these requirements that the true artist is able to meaningfully portray both the majesty of the god Ganesh as well as his approachability which has made him one of the most popular deities in India and beyond for one and a half millennia; it is to Ganesh that millions of people turn, to invoke his assistance, before undertaking any new task.
the pot-bellied four armed deity seated with his legs loosely crossed his primary hands in abhaya mudra and holding a bowl of sweets his upper hands holding axe and his broken tusk mounted

Private collection London; acquired at auction in London about 20 years ago.