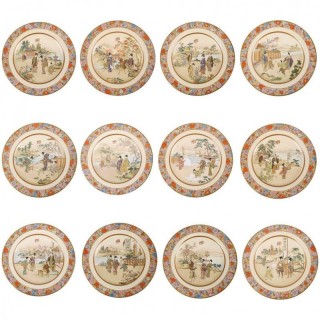 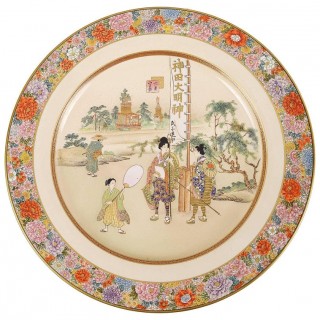 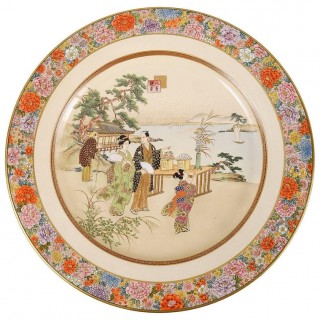 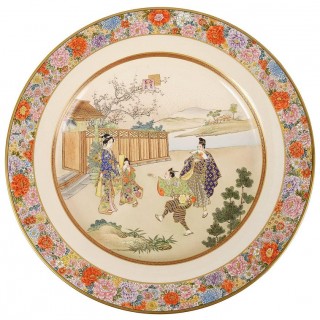 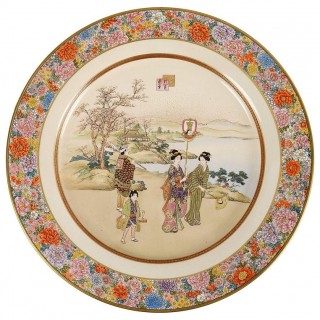 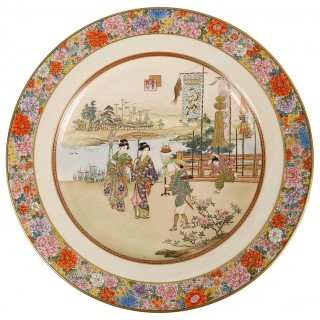 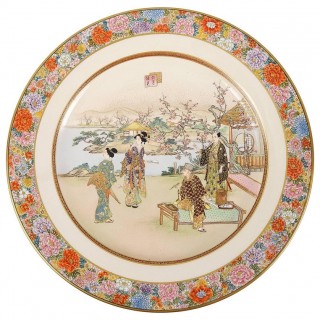 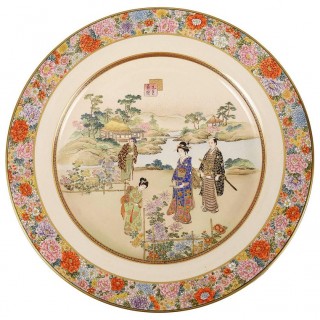 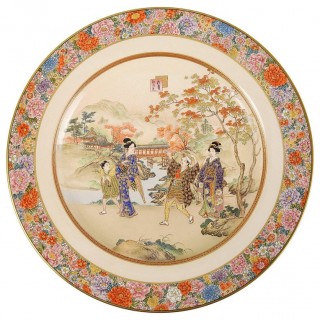 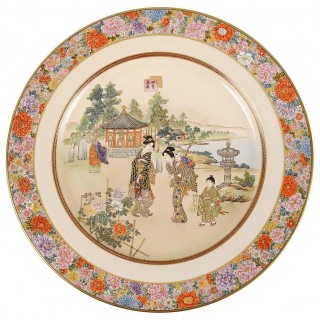 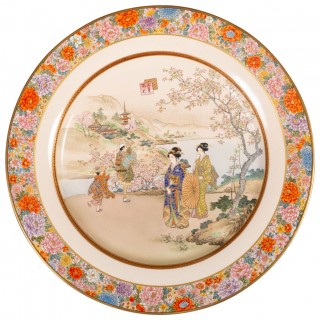 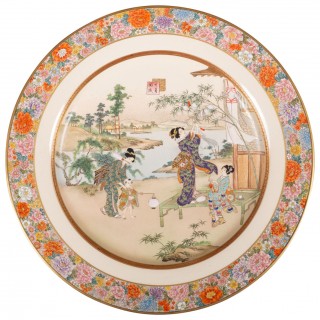 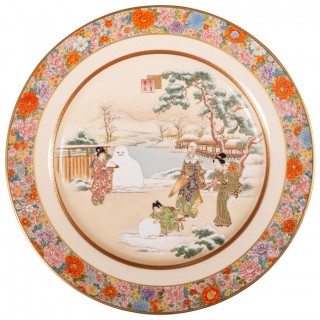 A fine quality set of 12 Japanese Satsuma Kinkozan plates.
Each decorated in enamels and gilt with a circular panel enclosing a figural or genre scene associated with one of the 12 months on a ground bordered by a band of dense millefleurs, each plate with two overlapping shikishi (square-shaped poem-cards) indicating the name of the month and its associated scene as below:

1) Shogatsu: Manzai (First month: manzai dancers), manzai dancers entertaining a mother and her daughter in front of their house in the New Year;

2) Nigatsu: Umemi (Second month: plum-blossom viewing), a samurai family and a chajin (tea master) or poet in a garden, flowering plum trees on the lakeshore;

3) Sangatsu: Sakurami (Third month: cherry-blossom-viewing), a lady and her servant strolling along the shores of a lake admiring flowering cherry blossoms as itinerant entertainers pass by;

4) Shigatsu: Kanbutsu (Fourth month: the Buddha’s birthday festival, held on the eighth day), a monk within a temple’s precincts, women and children in the foreground, one child holding an oke (bucket) filled with sweet tea for baptizing Buddha’s head;

5) Gogatsu: Sekku (Fifth month: Boys’ Festival, held on the fifth day), a boy running with a banner to his mother and a servant talking to a courier delivering a kabuto (helmet), several banners in the background with designs associated with the festival;

6) Rokugatsu: Sanno Matsuri (Sixth month: Sanno Festival), two ujiko (pilgrims) standing by a tall banner inscribed Kanda Daimyojin ujiko renchu (a group of pilgrims from the Kanda Shrine), two dashi (festival floats) from the Sanno Festival, one of the largest Shinto festivals in Edo, in the background on the other side of the river;

8) Hachigatsu: Kangetsu (Eighth month: the Mid-Autumn Festival on the 15th day), a family strolling on the shores of a lake during moon-viewing, rice cakes and a vase of autumnal plants on a stand behind them;

11) Juichigatsu: Tori-no-ichi (Eleventh month: the Tori-no-ichi fair, held on a tori [rooster] day), people bringing their old kumade (bamboo rake) charms decorated with masks of Ofuku, Goddess of Mirth, and exchanging them for new ones symbolising the ‘raking in’ of wealth and good fortune;

12) Junigatsu: Yukiasobi (Twelfth month: snow play), figures on the snow-covered banks of a river, thatched buildings nestled beneath a spreading pine on the right, two ladies walking, one girl rolling a large snowball in the foreground and another girl carrying a snow rabbit on a tray in front of a snow model of Daruma.

Each plate signed on the base with an impressed seal Kinkozan tsukuru.