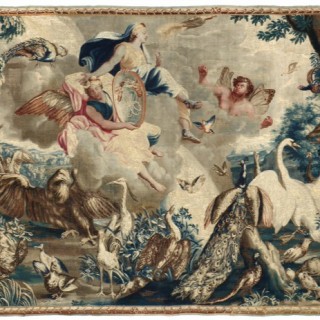 17th Century ‘Menagerie de Versailles’ Tapestry – ‘Air’, from a four piece set, plus entre-fênetres depicting the Four Elements. A very rare tapestry dating from 1680-1710, as in total five sets of the four piece elements set were completed before 1673 and a sixth set by 1680.  From a private collection this exceptional and breathtaking tapestry has gold and silk thread and is in beautiful condition.

The tapestries of the four elements ‘Fire, Air, Water and Earth’ constitute the first set to be wholly designed and executed at the established Manufacture Royale de Tapisserie des Gobelins.  They are based on an allegorical scheme that was initiated by the finance minister and superintendent of the Bâtiments, Jean-Baptiste Colbert (1619-1683) and developed between 1663 and 1664 by the members of the Petite Académie, a group of scholars who had been charged by Colbert with devising programs of propagandistic iconography to celebrate Louis XIV.

Please request an appointment at our showroom or in-situ to view this remarkable 17th Century Tapestry up close.

The designs were created in 1664 by the director of Gobelins and first painter to the King, Charles Le Brun (1619-1690).  Each consists of the four main scenes depicted the classical god associated with one of the four elements.  In ‘Fire’, Vulcan and the Cyclopes. In ‘Air’, Juno and Iris in ‘Water’, Neptune and Thetis and in ‘Earth’, Cybil and Ceres.

In the 2007-2008 exhibition ‘Tapestry in the Baroque – Threads of Splendour’ at the Met in New York, which included only one tapestry – ‘Water’ – from the set, and illustrated only this and ‘Fire’. There is, however, a complete version of ‘Air’ – with the same cipher of Louis XIV on the shield as on the Palazzo Pitti tapestry included in the Met exhibition – in the Palazzo Reale, Naples, with the design reversed from ‘Air’ Tapestry we have here.

After much research we have no found any to have been woven at Beauvais or elsewhere, so we can assume that this is Gobelins, from either one of the six sets woven prior to 1680, or one of the two woven in the early 18th century around 1710.   We are currently working on the cipher monogram in the centre of the tapestry to whom it refers, this is likely to tell us for whom it was woven and, by extension, possibly exactly when.

Some old restoration is apparent and this tapestry may well have had a larger border at one time.