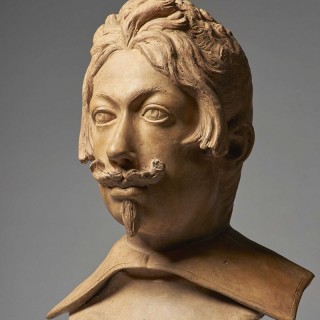 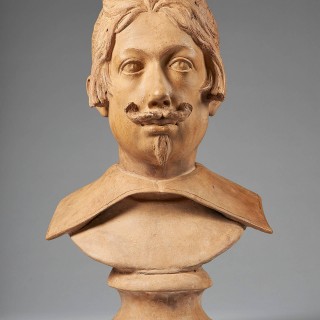 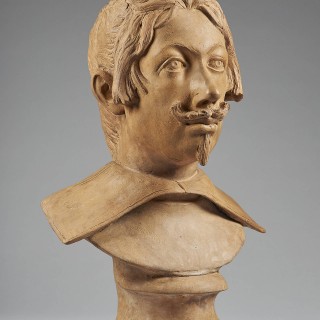 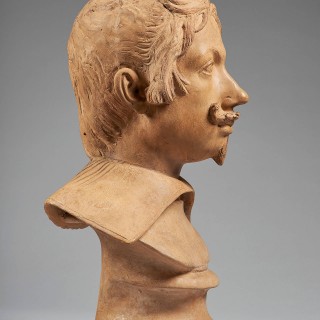 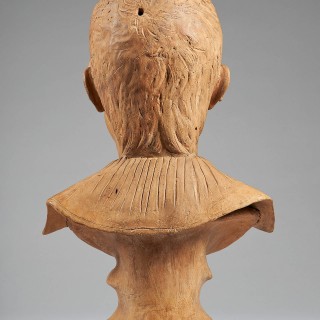 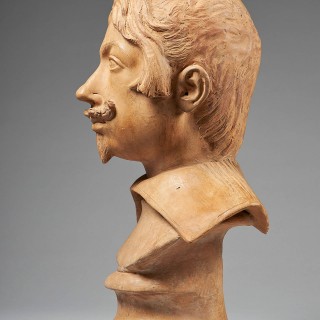 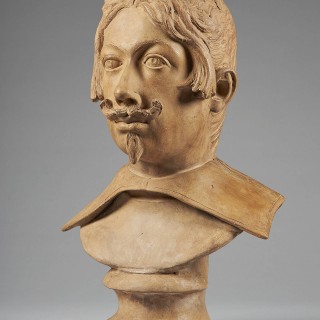 This charismatic terracotta bust depicts Ferdinando II de’ Medici (1610-70), the Grand Duke of Tuscany from 1621-70 and the son of Duke Cosimo II de’ Medici and Maria Maddalena of Austria. The Medici were a powerful and influential Florentine family who became rulers of Tuscany from the sixteenth to eighteenth centuries. Three Popes came from the family along with a line of important rulers, most notably Lorenzo the Magnificent (1449-1492), patron of some of the greatest artists of the Renaissance, including Sandro Botticelli and Michelangelo. Like his father, Ferdinando was a patron of Galileo Galilei, one of the most important astronomers and polymaths of the Renaissance. Galileo named his newly-discovered moons of Jupiter (the ‘Medicea Sidera’) in honour of the Medici family. Ferdinando married Vittoria Della Rovere, with whom he had two children, including Cosimo III, his eventual successor.

The present terracotta can be attributed to the workshop of Pietro Tacca, the gifted court-sculptor and follower of Giambologna and contemporary of Bernini. Baldinucci’s biography of Pietro Tacca (op. cit.) notes the sculptor’s skill in making models from wax and clay, a passion from his youth which he must have passed on to his large workshop in Florence. As Baldinucci notes, when a young boy in his hometown of Carrara, Tacca’s parents found him modelling after being accidentally locked in a sculptor’s workshop, after which he was sent to Florence to study under Giambologna, the great Mannerist sculptor to the Grand Dukes. Tacca succeeded Giambolgna as grand-ducal sculptor in Florence after his master’s death in 1608, completing a number of his works and taking over his workshop. His works for the Medici include his masterpieces, the four Slaves (c.1615–24) at the foot of the monument to Ferdinand I de’ Medici in Livorno.

The terracotta bust in question is closely related to several other contemporary terracotta portraits of Ferdinando II, all of which were probably derived from the same model used for a marble portrait by Tacca of the Grand-Duke. Although there has been some debate as to whether these busts depict Ferdinando or his similar-looking father, Cosimo II, recent scholarship has now identified the present sitter as Ferdinando. This is based on comparisons with painted portraits, as listed by Karla Langedijk (op. cit.), as well as two recently identified busts: one a contemporary bronze bust of Ferdinando II (with Galerie Kugel, Paris), the other a full-length terracotta recently catalogued by Demetrios Zikos, to which the present bust is closely related. Zikos (op. cit.) has also attributed to Pietro Tacca and his workshop several versions in terracotta, which relate closely in terms of size and style to the present bust, leading to the conclusion that our bust also originates from Tacca’s workshop.

The extending linen collar, a golilla, was to show not only the latest international fad for the – rather austere, black and white – Spanish court fashion, but the ruler obeying the sumptuary laws that were introduced from time to time, one of which outlawed the starched ruff, on account of the expenditure of time in the laundering and ironing after each time it was worn for any length of time in the hot climates of Iberia and Italy. Thus it shows Ferdinando at the cutting edge of the ‘political correctness’ of the day. To offset this stark appearance, the portraitist has emphasised the facial features and given the young Grand-Duke a majestic – but approachable – expression, by showing his hair as ruffled naturally by some passing breeze and catching our eye with the neatly waxed and curled ends of his moustache. The Prince sported the latter after a severe bout of smallpox in 1626, probably in order to disguise and distract attention from the disfigurement of his face, and to save having to shave it.

These features make the bust a pleasing portrait of a talented and interesting member of a great family in the history of Florence and of European art.