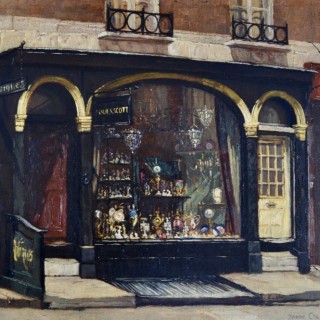 Signed l.r.; signed, inscribed with title and the artist’s address on a label on the reverse
Oil on panel

The shop depicted is the antique dealers Leslie S Scott who were active in the trade in around 1950. Always a fashionable enclave within Belgravia, Motcombe Street has long been a significant address for art, antique dealers and auctioneers (Sotheby’s had their Belgravia salerooms there in the 1970s and 1980s). This shop is now the home of the hairdresser Errol Douglas.