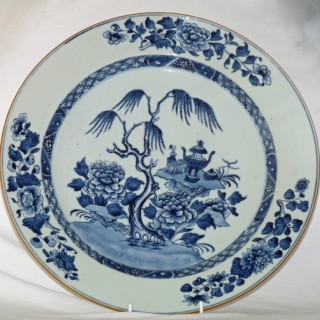 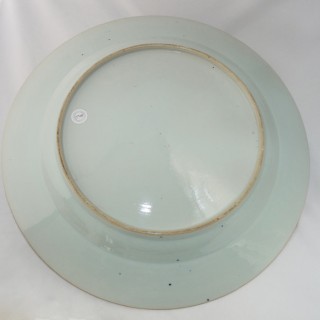 Qianlong blue and white porcelain charger made for export to Europe.
Excellent painting and potting with out warping. The painting to the centre shows Chrysanthemums, a twisted willow tree and a table of scholars items. Peonies and foliage appear on the border. the café au lait or brown rim was put on as it was believed that it prevented fritting and chipping. But it didn’t although this one is perfect
large chargers like this one were for decorative purposes rather than eating from. They were used in manor houses to lighten a dark corner as they were seen as being cheaper than an oil painting but still showed wealth and status.
Potting large chargers was difficult as many warped due to the fine potting and thinness of the porcelain.