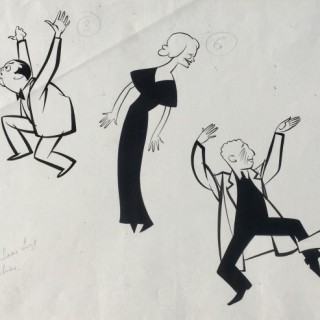 Call to the Dance

Born in Edinburgh, Sherriffs was educated at Arbroath High School and studied at Edinburgh College of Art, initially specializing in heraldry. He contributed to several magazines, and his caricature of John Barrymore in the Bystander led to a series of illustrations of celebrities for the Sketch which resulted in his being appointed the magazine’s film and theatre caricaturist from 1930 onwards. He also contributed weekly drawings to the Radio Times. He was expected to replace Will Dyson as the editorial cartoonist to the Daily Herald, but instead the position went to his friend, George Whitelaw. After serving with the Tank Regiment in WW2, in 1948, he succeeded J H Dowd as film caricaturist on Punch until his death. He illustrated a few books; and was also an accomplished cricketer.

Sherriffs described his own distinctive style of drawing: “The brush was better than the pen for all manner of drawings, and confirmed my previous conviction that figures and faces were patterns to be studied and memorised – not patiently drawn from life. I regarded caricatures as designs, and the expressions on faces merely as changes in a basic pattern”.