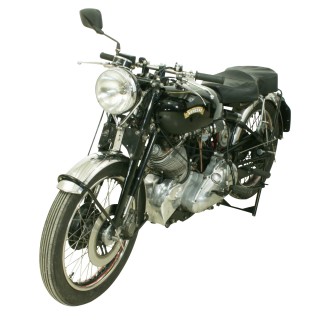 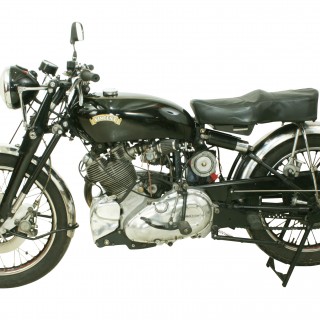 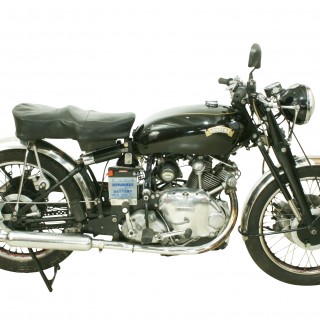 As an historic vehicle this Vincent is eligible for the free road tax scheme in the UK. It is a 499cc bike and was manufactured in 1950.

The frame number is 6664 and the engine number is 4764.
This means it is a matching number bike as Vincent numbers where always 1900 apart.
This Vincent is a very usable machine with some modifications to make it a safer ride in todays traffic. It has a alternator Mikuni carburettor and disk brake in the front. The original drum brake comes with the bike and can easily be put back.
The bike runs well and is in very good but not concurs condition. There are some oil leaks as you find on most british bikes. The brakes work very well.
A fine machine to ride and a good investment.

The Series – C Vincent Comet was manufactured from 1949 to 1954. It is effectively a Rapide V-twin (minus the rear cylinder) albeit with reduced performance. Initially the Comet cost £190 when new, the price rose to £240 and later still higher to £258. This included lots of high-class perks, like sturdy prop-stands provided on each side of the machine and tyre levers, tools, grease gun and such as standard equipment, plus fully adjustable footrests and Vincent’s famous flat handlebars with wrist-angle adjustment. The Comet was finished in Pinchin Johnson’s ‘best stoving enamel’ with some sparkle provided by the heavily chrome-plated exhaust, controls, bars and wheel rims.

Vincent Motorcycles remains one of the most prestigious brands of manufacturers of British bikes. They came to be when Phil Vincent bought the name and rights to HRD in 1928. HRD Motors Ltd was an established British motorcycle manufacturer in the early 1920’s. It was founded by Howard Raymond Davies who had worked in motorcycling and had raced with some success. HRD motorcycles were produced for a limited time from 1924 to 1928. They had a very good reputation for performance but the undercapitalised company struggled to survive. As HRD was an established brand Phil Vincent capitalised on their name by incorporated it in to his new company ‘The Vincent HRD Company Ltd’. Vincent survived until 1955 when the company discontinued motorcycle production after experiencing financial losses.