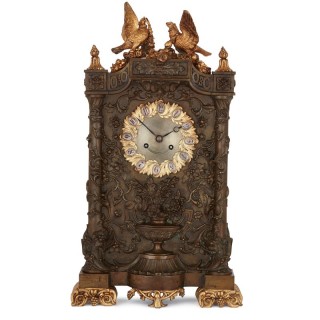 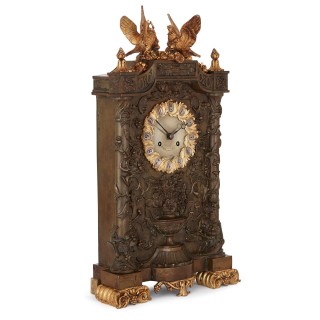 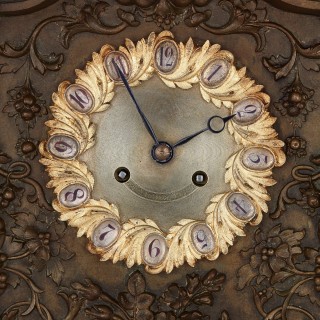 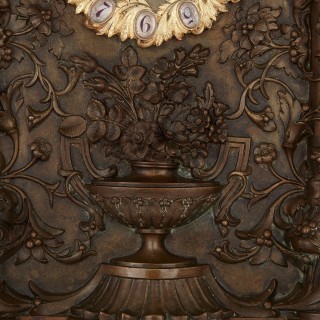 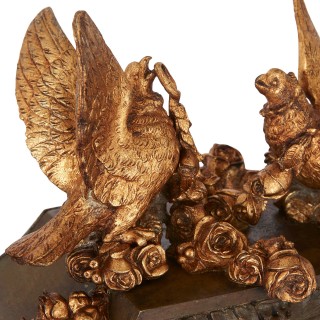 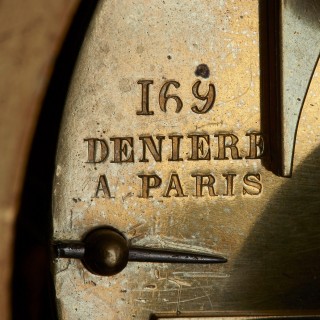 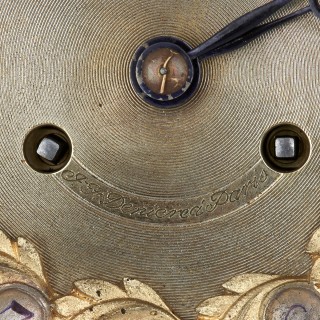 This beautiful and ornate mantel clock was crafted by the famous French metalworker, Jean-François Denière in the first half of the 19th Century. In 1804, Denière founded Denière & Fils, which became the chief manufacturer of decorative bronzes in Paris. The firm was chosen by Emperor Napoleon III to be the official ‘Fornisseurs de Roi’, or King’s Supplier. The company also exhibited in major world shows, including the Exposition Universelle, which was held in Paris in 1855.

The clock is supported on two ormolu feet, which take the form of scrolling foliage, with grapes at their centre. Between them, there is an ormolu mount, which is similarly designed to imitate a twisting grape vine.

The body of the clock is covered with vine-like, foliate forms. These wind around two columns, which border the piece, and grow out, extending into the centre. The vines curl around the handles of a flower vase, which decorates the lower-centre of the piece. Above, there is a circular, metal clock dial, which features Arabic numerals encircled by medallions and set within a gold coloured leafy border. The dial is inscribed, ‘J.-F. Deniere à Paris’, and the backplate stamped ‘Deniere/ A Paris’.

The top of the clock is articulated by a strapwork and foliate frieze. This is topped by a gilt bronze sculpture of a flower garland, which is being picked at by a pair of open-winged lovebirds. The pair of birds are flanked by two pinecone finials.

With its undulating, organic forms of decoration, this clock is a beautiful piece which will be sure to liven up the room in which it is placed.