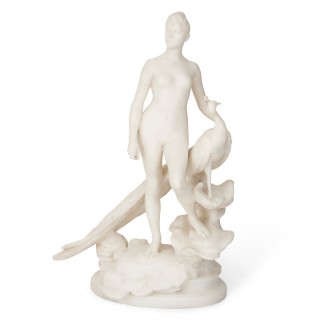 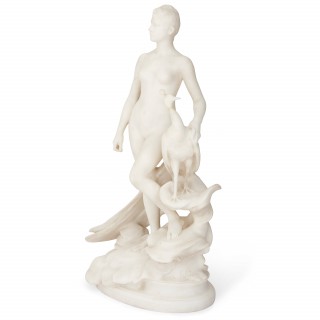 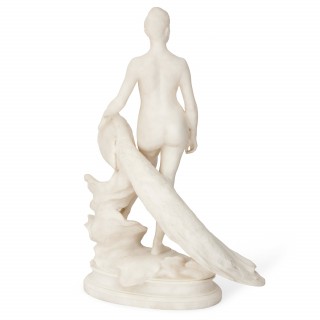 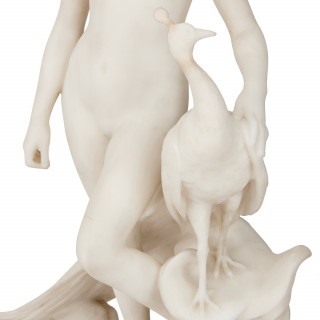 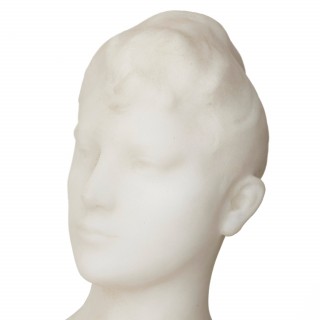 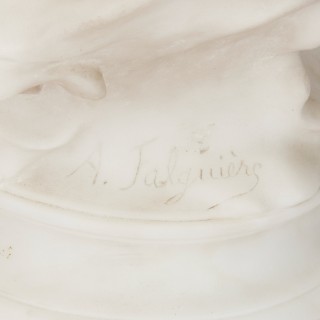 This fine sculpture is carved entirely in sumptuous white marble. The sculpture is titled ‘La Femme au Paon’ and is created by Alexandre Falguiere (French, 1831-1900). The original marble sculpture, which is life-size, was exhibited in 1890 at the Paris Salon and is now housed at the Musee des Augustins in Toulouse. The sculpture depicts the nude figure of the Greek goddess Hera (known as Juno in Roman mythology) standing with her arm on the wing of a peacock, who stands with her on a rocky, naturalistically carved circular stepped base. The base is signed ‘A. Falguière’.

Hera is associated with the peacock in Greek and Roman mythology. According to Ovid’s metamorphoses Juno (the Roman equivalent of Hera), the wife of Jupiter, becomes suspicious that Jupiter is meeting secretly with Io, a mortal. Io is turned into a cow by Jupiter to prevent Juno from discovering the secret. Juno, suspicious that the cow is Io, asks for the cow as a pet, and entrusts the guard dog with 100 eyes, Argus, to guard the cow. Jupiter instructs the god Mercury to kill Argus and free Io. This greatly angers Juno, who commemorates Argus by taking his 100 eyes and adding them onto the tail of the peacock, her favourite bird.