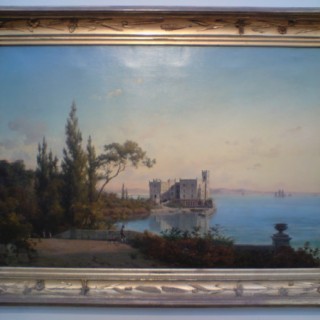 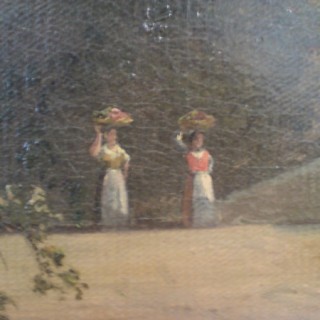 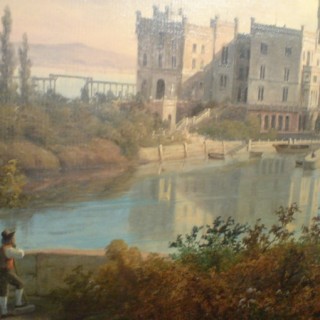 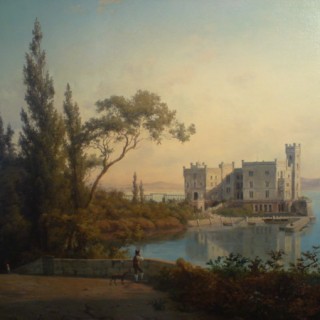 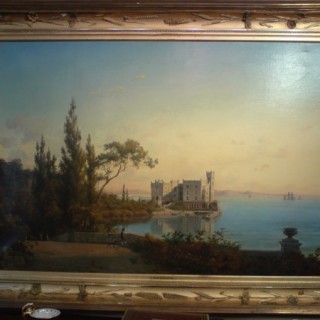 1875 oil painting of the castle at Trieste painted when the building was only 10 years old by Danish artist Axel Schovelin – 1827-1893. The castle is still there today and is now a museum (look up Castello di Miramare). It was built by Archduke Maximillian on the waterfront 8 km from Trieste, was built between 1856 and 1860 from a project by Carl Junker working under Archduke Maximilian. The Castle gardens provide a setting of beauty with a variety of trees, chosen by and planted on the orders of Maximilian, that today make a remarkable collection. Features of particular attraction in the gardens include two ponds, one noted for its swans and the other for lotus flowers, the Castle annexe (“Castelletto”), a bronze statue of Maximilian, and a small chapel where is kept a cross made from the remains of the “Novara”, the flagship on which Maximilian, brother of Emperor Franz Josef, set sail to become Emperor of Mexico. Much later, the castle was also the home of Prince Amedeo, Duke of Aosta, the last commander of Italian forces in East Africa during the Second World War. During the period of the application of the Instrument for the Provisional Regime of the Free Territory of Trieste, as establish in the Treaty of Peace with Italy (Paris 10/02/1947), the castle served as headquarters for the United States Army’s TRUST force.