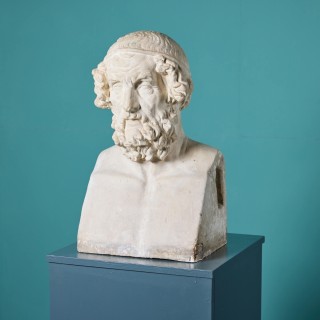 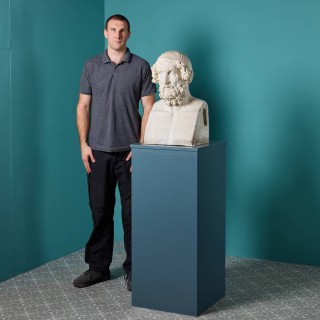 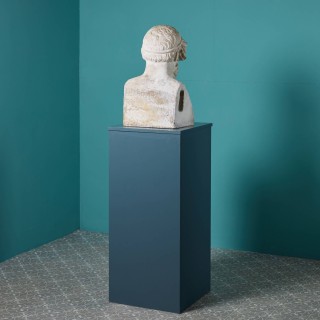 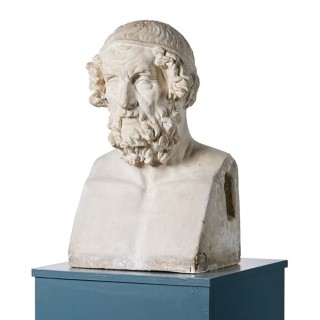 A rare 19th century plaster portrait bust of Homer after an almost identical plaster design by Italian sculptors Carlo and Filippo Albacini, depicted in herm-type style with a detailed head and partial torso. It is a scale copy of an original marble bust of Homer that can currently be found in the British Museum.
This Greek bust depicts the legendary poet and author Homer who is presumed to have penned the two of ancient Greece’s most epic poems: the Iliad and the Odyssey. Scholars are uncertain whether or not Homer actually existed but if he in fact did exist, Homer would be regarded as one of the greatest literary artists of his time.
This plaster bust bares a great likeness to his famous portrait, which was likely first depicted during the Hellenistic era but remains recognisable to this day. It captures his supposed likeness in incredible levels of detail including his blindness – though whether or not he was actually blind is another cause for debate. Despite the questions over his existence, Homer has become synonymous with the history of Ancient Greece.
This is an iconic statue for an interior and looks particularly impactful when placed on a column or plinth.
Additional Information
Blue plinth not included.

After an almost identical design by Italian sculptors Carlo & Filippo Albacini. A scale copy of an original marble bust that can currently be found in the British Museum.