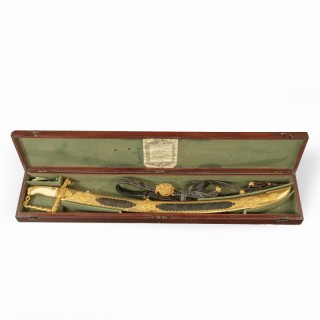 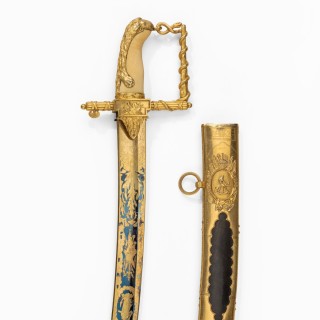 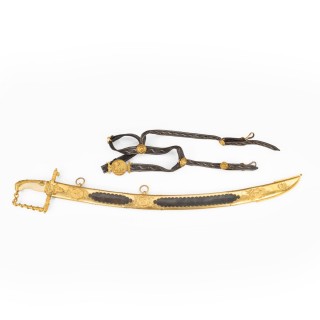 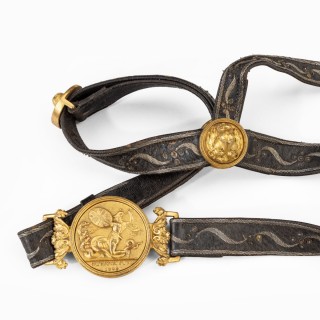 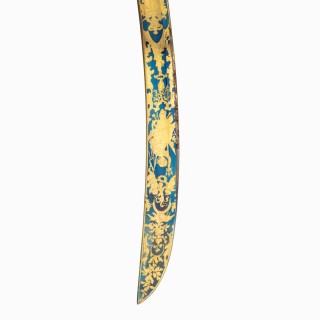 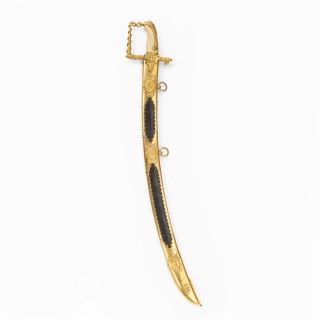 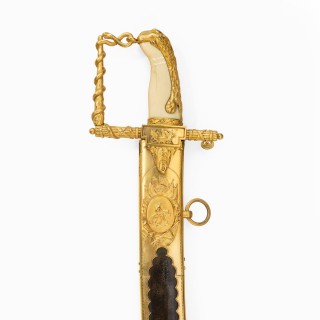 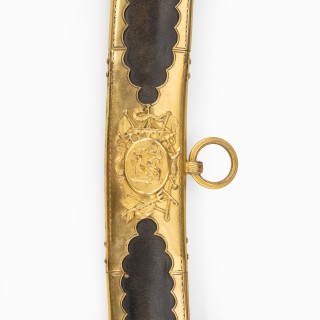 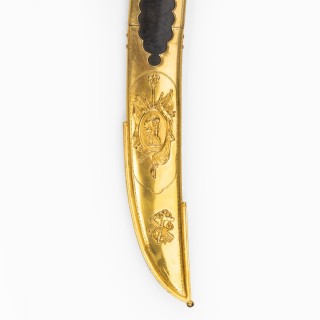 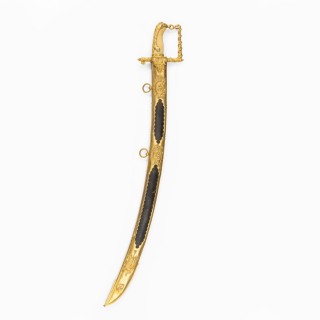 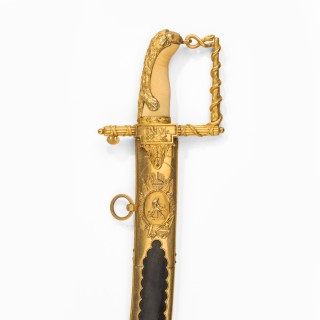 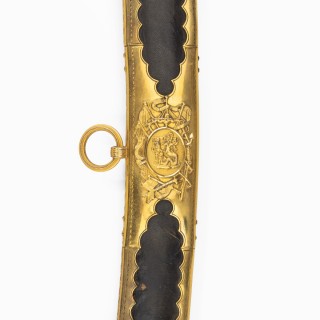 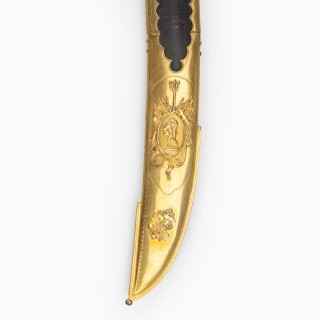 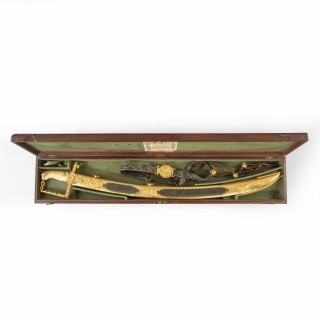 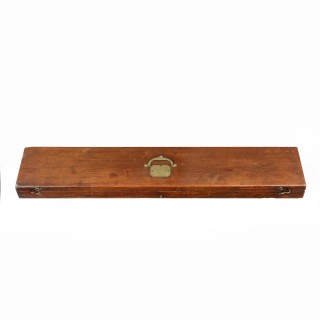 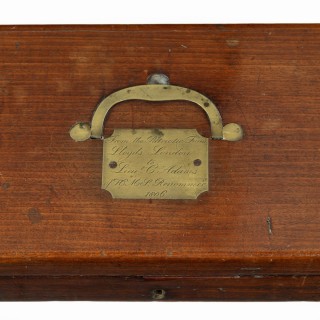 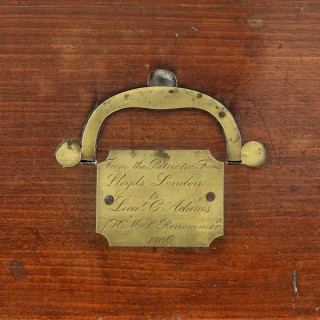 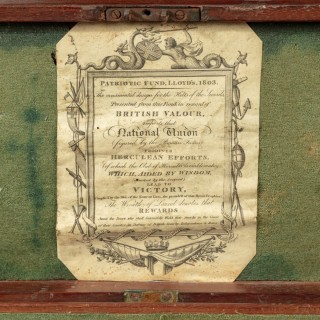 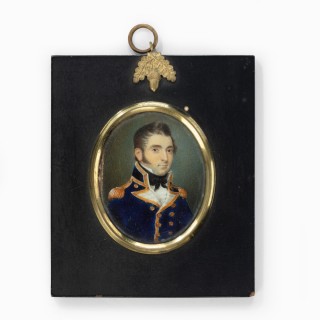 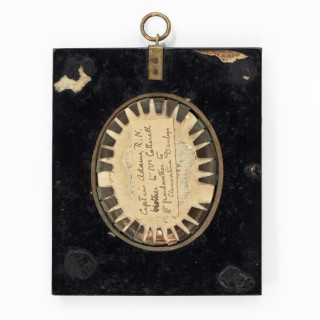 A £50 Lloyds Patriotic Fund Sword awarded to Lieutenant Charles Adams of HMS Renommee For His Part in the Capture of the Spanish Schooner Giganta, 1806

A £50 Lloyds Patriotic Fund Sword awarded to Lieutenant Charles Adams of HMS Renommee For His Part in the Capture of the Spanish Schooner Giganta, 1806, the curved single-edged hollow-ground blade (minor areas of wear and rust patination) richly etched and gilt against a blued ground with flowers, foliage, a naval trophy, figures of Britannia and of Hope, the crowned arms and cypher of George III, a cornucopia, and the presentation inscription, stirrup hilt of ormolu, the quillons formed as fasces, the knuckle-guard as a Hercules club entwined by a snake, the langets cast with acanthus foliage and applied naval trophies, the back-piece of the chequered ivory grip (minute split and chip) cast as the skin of the Nemean Lion, in its original shagreen (minor damage) border engraved scabbard mounted in ormolu, the mounts with applied naval trophies and fouled anchors, the former framing respectively figures of Hercules with the Hydra and with the Nemean Lion, and a nude man with a tiger on an anchored leash, two suspension rings, the locket engraved ‘R. Teed. Dress Sword Maker to the Patriotic Fund, Lancaster Court, Strand, London’, and retaining nearly all its original finish; the belt of navy blue leather (some wear and minor damage) embroidered with silver threads and spangles (minor losses), the gilt mounts including lion-mask bosses, the interlocking circular buckle cast and chased with Britannia fighting the Hydra above ‘Patriotic Fund’: the interior of the lid with illustrated maker’s label, the exterior with flush-fitting brass carrying handle and escutcheon with clipped corners, the latter engraved ‘From the Patriotic Fund Lloyds London to Lieut, C. Adams of H.M.S. Renommée 1806’.

Offered with an oval portrait miniature of Captain Adams, watercolour on ivory, wearing naval uniform with gold bullion epaulettes and gilt buttons, in a rectangular papier-mâché frame, the reverse with an old paper label with handwritten inscription ‘Captain Adams, R.N. brother to Mrs Cotterell gt. grandmother to Clementina Dunlop’. English School, circa 1806, (H 2 ¾ in frame 4 ¾ in x 4in).

The presentation inscription reads: ‘From The Patriotic Fund At Lloyds To Lieut. C. Adams Of H.M.S. Renommée For His Gallant Conduct In Boarding & Carrying In The Boats Belonging To That Ship From Under The Guns Of The Town & Tower Of Viega, His Catholic Majesty’s’ Schooner Giganta Of 9 Guns & 38 Men On The 4th May 1806. As recorded In The London Gazte. Of The 8th Of July.‘ Late on 3 May 1806 boats from the Renommée and Nautilus, under Lieutenant Sir William Parker, cut out from the Port of Vieja the Spanish schooner Giganta of 9 guns and twenty-eight men commanded by Captain Don Juan de Moire. The Giganta was chain-moored within pistol-shot of the shore batteries and defended by one hundred musketeers stationed on the beach. In spite of these formidable defences British losses were just one killed and six wounded. The capture of Giganta in the port of Vieja is vividly described by William James in his Naval History of Great Britain Vol IV. James describes the action as follows:

“On the 3d of May, late in the evening, Captain Livingstone, cruising to the north-east of Cape Palos, despatched the boats of the Renommée and Nautilus, under the command of Lieutenant Sir William Parker, assisted by Lieutenants Charles Adams and Alexander Nesbett, Lieutenant of marines Henry Meerton, Mr. Timothy Murray, boatswain of the Renommée, and Mr. Dawson, carpenter of the Nautilus, and several midshipmen, to cut out from the port of Vieja, the catholic king’s schooner Giganta, of two long 24-pounders in the bow, three long 4-pounder carriage-guns and four 2-pounder swivels, and 28 men, commanded by Captain Don Juan de Moire.”

A £50 Lloyds Patriotic Fund Sword awarded to Lieutenant Charles Adams of HMS Renommee For His Part in the Capture of the Spanish Schooner Giganta, 1806