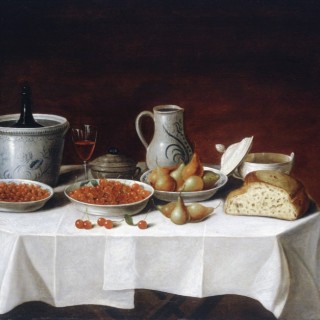 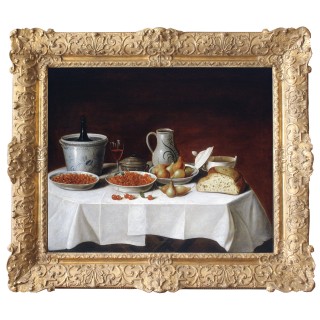 This large and finely-detailed still life painting shows a neatly prepared table of fresh, white linen and sparkling kitchenware, brightly illuminated in chiaroscuro against a dark background. On the table are placed carefully arranged bowls of fruit (cherries, pears and raspberries), bread, a jug of water, a glass of red wine, a bottle of wine cooling in a bucket, and two other pots. The attribution to André Bouys, a French painter of the late Baroque, is based on its similarity in composition and style to other still lifes by the artist.

André Bouys was born in Hyères in southern France in 1656. He was a pupil of François de Troy in Paris, where he established his reputation as one of the foremost portraitists of his generation, becoming a member of the French Academy in 1688. His membership to the Académie Royale de Peinture et de Sculpture in 1688 was secured on the basis of two portraits of his contemporaries, the artist Charles de la Fosse (1640-1716) and the sculptor Etienne le Hongre (1628-1690), both of which are now housed in the Musée de Versailles (Inv. nos MV3582 & MV. MV3636). Although his principal occupation was as a portraitist, Bouys also executed genre scenes and still life paintings, of which the present painting is a good example.

The attribution to Bouys is confirmed in a letter by Eric Turquin Expertise S.A., Paris.