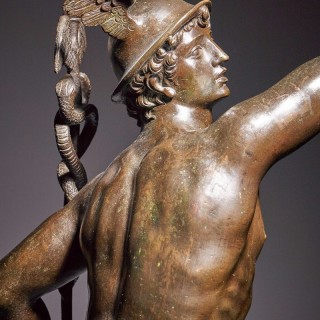 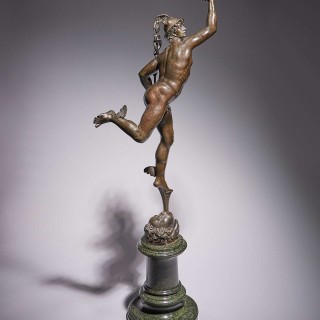 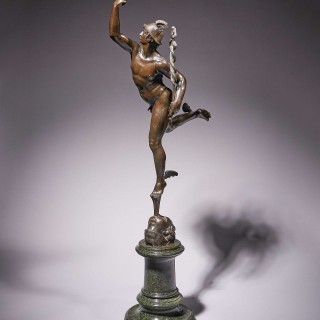 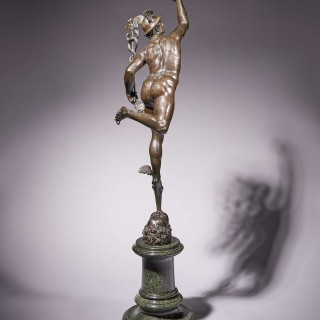 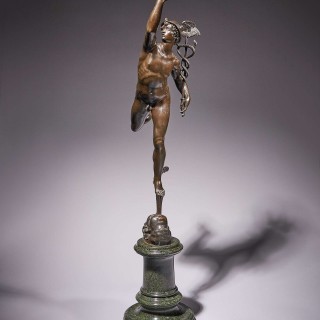 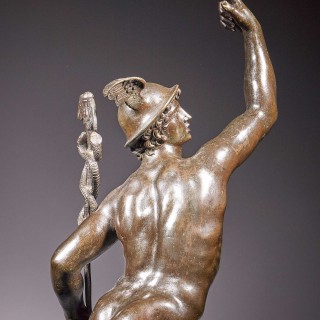 A Bronze Figure of The Medici Mercury, Italian, 19th Century

This large and well-executed bronze figure is after the iconic statue of Mercury in the Bargello Museum, Florence, which was executed by Giambologna in approximately 1580 for Cardinal Ferdinando de’ Medici’s Roman villa, the Villa Medici.

Like the Bargello bronze, the present figure of Mercury – the Roman messenger god of commerce, travel and communication, known to the Greeks as Hermes – is depicted as a naked youth in flight, balanced on his left leg upon a plume of air issuing from the mouth of a young putto’s head. He wears a round winged hat (petasus) and holds in his left hand a caduceus, a magical staff with intertwined snakes; further winglets are attached to his bare ankles.

While the stance of the Medici Mercury is in classical contrapposto typical of High Renaissance sculpture, the dynamic twisting motion of the figure from right to left, known as a figura serpentinata, invites the viewer to move around the sculpture and appreciate it from all angles. This Mannerist style of twisting composition moving around a central axis became the hallmark of Giambologna’s most famous monumental sculptural groups in Florence, such as the Rape of a Sabine Woman and Hercules Slaying a Centaur.

The present composition, referred to by Avery (op. cit.) as the “Medici” Mercury due to the patron of the Bargello bronze, relates to an early model in bronze of 1563-64, now in Bologna (Museo Civico, No. 68). Another composition of the Mercury, which has a more mannered posture with a sharply upturned head and straighter right arm, was probably formulated by Giambologna in the 1570s and is demonstrated by casts in Naples (Capodimonte Museum, 10784) and Vienna (Kunsthistorisches Museum, 5898).

The Bargello Mercury was transferred from the Villa Medici in Rome to Florence in 1780, providing a likely terminus post quem for this bronze. This cast is distinguished by its dark brown patina, fine anatomical modelling and excellent finishing of the surface details, which faithfully reproduce the Bargello bronze. The crisply rendered locks of hair under Mercury’s hat, as well as the fine chasing of the wing feathers and snake scales on his caduceus, indicate that it was executed by a good nineteenth-century Italian workshop.

Giambologna was the greatest sculptor of the Mannerist period. Of Franco-Flemish origin and training, he became known as Giovanni Bologna during his time travelling and studying in Italy around 1550, soon after which he settled in Florence. His main patrons in Florence were the Medici dukes, for whom he set up a large workshop. After the death of Michelangelo in 1564, his graceful and inventive style, informed by Michelangelo as well as by the antique, dominated Italian sculpture for half a century. Copies of his sculptures and statuettes, cast in bronze by his Florentine pupils and followers, disseminated his style across Europe throughout the seventeenth and eighteenth centuries.

A Bronze Figure of The Medici Mercury, Italian, 19th Century