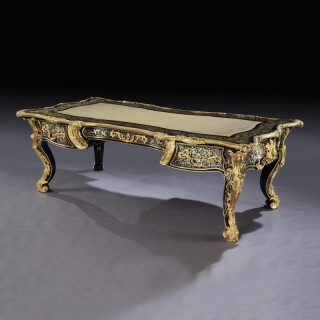 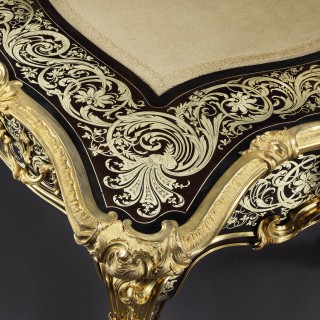 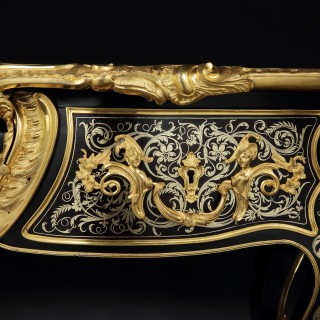 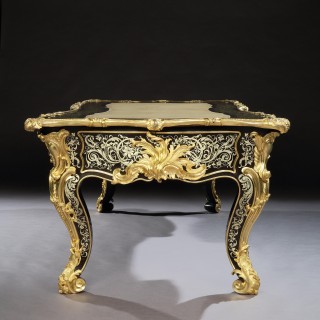 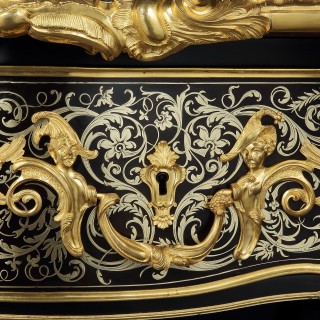 A Bureau Plat in the Louis XIV Manner By Toms and Luscombe shown at the 1862 International Exhibition, London

Constructed in the manner of Andre-Charles Boulle, using complex arabesque premiere-partie inlays on an ebony ground: the whole richly dressed with bronze doré mounts; of serpentine form, rising from strongly modelled swept cabriole legs dressed with foliate entwined chutes, capped with cartouches and terminating in scrolled sabots, the apron of bombe form enclosing the kneehole, housing three lockable drawers flanked by ormolu clasps, and three similarly dressed faux drawers to the obverse, having complex loop handles; the platform having a tooled Morocco leather writing surface, with the complex arabesques in the reserve, and having an outer foliate cast ormolu guard edge.

The bureau plat has a rich history, exhibited and praised at the 1862 International Exhibition, but also featured in the iconic 1962 James Bond film Dr No starring Sean Connery. Shown on set in the quarters of Dr Julius No on Crab Key alongside numerous famous masterpieces such as Francisco Goya’s Portrait of the Duke of Wellington, the décor used in this first James Bond film has entered popular culture, and symbolises the opulence, luxury, and glamour of 1960s cold war era spy films.

Successors to, and working from the same premises as Town and Emanuel, which they took over between 1840 and 1851, they traded from the same address at 103 New Bond St. and also specialised in fine quality Boulle or “Buhl” marquetry as it was often referred to in England. They appear in the 1851 census. (Inlay, Marquetry and Buhl Workers in England c. 1660-1850, Pat Kirkham, The Burlington Magazine, Vol. 122, No. 927 {Jun., 1980}, pp. 415-416 and 419). They exhibited at the Great Exhibition of the same year and are recorded as showing ‘A pair pedestals in buhl and ormolu and pair of tulipwood stand and cabinets ornamented with china and ormolu”. An article in the Illustrated London News comments on our bureau plat, which it also illustrates.

At the time of the 1862 Exhibition in London they can be found in the catalogue as exhibitors 5839 and were awarded a medal for “Buhl cabinets and tables for good design and workmanship”. John Burney Waring in “Masterpieces of Industrial Art and Sculpture 1862” includes a chromolithograph of their work (Plate 252) which shows a Table and Cabinet, commissioned by the Earl of Craven. (Reproduced Jonathan Meyer, Great Exhibitions, London, New York, Paris and Philadelphia 1851-1900, Woodbridge, 2006 p.15).

This bureau plat model appears in the inventories of Clandon Park, the Duke of Buccleuch collection at Bowhill, and the Earl of Normanton at Somerley. Christopher Payne’s ‘European Furniture of the 19th Century, published by the Antique Collectors Club 2013’ shows images of similar bureau plats.

A Bureau Plat in the Louis XIV Manner By Toms and Luscombe shown at the 1862 International Exhibition, London