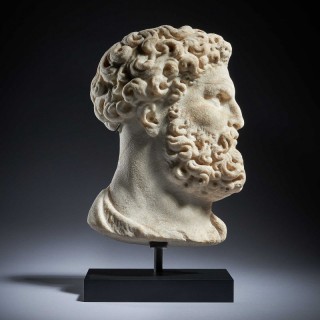 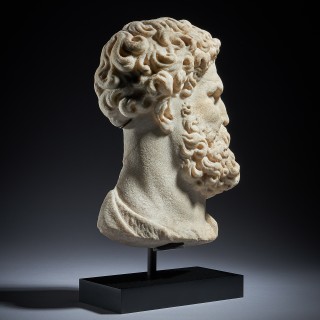 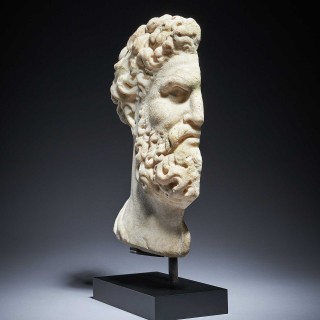 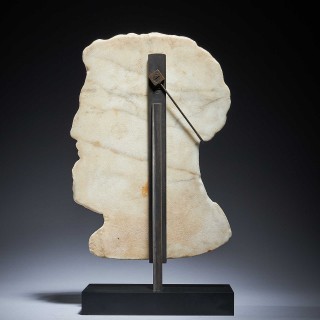 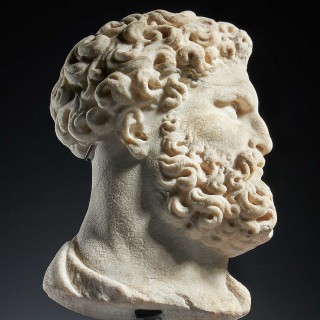 This small-scale yet impressive marble roundel depicts the right profile of a virile young male with thick locks of hair on the head and beard, which are drilled to add volume to the relief. His powerful physiognomy, suggested by the thick neck and furrowed brows, are typical of ancient representations of the Roman god Hercules (Heracles to the Greeks), survivals of which include the famous collosal statue of the Farnese Hercules in Naples (Museo Nazionale) and the Hercules and Antaeus (Florence, Palazzo Pitti).

The somewhat exaggerated proportions of the face, however – such as the small nose and eyes contrasted against the massive neck and head – indicate that the present relief relates to the Mannerist school of Florentine sculpture, whose chief proponents were Michelangelo (1475-1564), Baccio Bandinelli (1493-1560) and, later in the century, Giambologna (1529-1608). It is in the later works of Giambologna that the present relief bears the closest similarities in terms of style and technique.

In the sixteenth century, Hercules became an important symbol for the rulers of Florence (both Republican and Medici), who wanted to associate their state with the Roman demi-god’s virtues of strength and fortitude. Representations of the god became common in Florentine art from the mid fifteenth-century, starting with Antonio and Piero Pollaiuolo’s series of paintings depciting the Twelve Labours of Hercules for Cosimo de’ Medici’s Palazzo. In the early sixteenth-century, Baccio Bandinelli was commissioned by the Republican government of Florence to execute the monumental statue of Hercules and Cacus (1525-34), whilst at the end of the century Giambologna carved the magnificent Hercules Slaying a Centaur (1595-1600, Loggia dei Lenzi).

Bandinelli was also a notable sculptor of works in relief, both of figurative scenes and profile portraits, a practice continued by his pupils, including Giovanni Bandini (1540-99) and Vincenzo Danti (1530-76). A relief of Hercules Wrestling Antaeus from the collection of Stanley J. Seeger, which may be attributable to Giovanni Bandini, also shows the right profile view of Hercules, who is portrayed with a small eyes and nose contrasted against the massive head and neck, similarly to the present head; however, the carving of the hair and beard is shallower and undrilled, as was common in Bandinelli’s works in relief. A figure from Vincenzo Danti’s marble relief of the Flagellation (1559, see Davis et al, op. cit.) also exhibits these similar facial characteristics, albeit with the hair carved in slightly deeper relief, like the present portrait.

The thick curls of drilled hair in the present relief, on the other hand, seem closer in execution to works by or related to Giambologna, such as: the bust of Jupiter in the Boboli Gardens, Florence (after 1560); the head of Hercules in his Hercules Slaying a Centaur (Florence, Loggia dei Lanzi, 1600); and another head from a fragmentary late sixteenth-century figure of Hercules Slaying the Lernean Hydra (Sotheby’s London, 10 Dec 2015), attributed to the circle of Giambologna. In all of these works, the drilled, twisting locks of hair and relatively small oval-shaped eyes may be compared to the present relief. The technique of cutting the head away from the background – which is uncommon (but not unknown of) in earlier Renaissance portrait reliefs in marble – was practiced by the late sixteenth-century sculptor Francesco Ferrucci del Tadda (1497-1585), who specialised in relief work in red porphyry.

These similarities indicate that the present relief was executed by a late sixteenth or seventeenth-century Florentine follower of Giambologna, who was also influenced by Bandinelli’s school of sculpture and by del Tadda’s relief work in porphyry.

Please note, we offer free delivery of this item within London and the Home Counties. We can provide quotes for shipping elsewhere in the UK and overseas.

Private collection, UK, by repute in the family since the 1950s

The surface of the marble is weathered, suggesting it spent a portion of its life outdoors, possibly in an architectural context. There is a small area of restoration to the lower right portion of the neck.