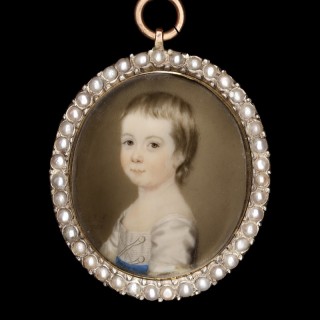 The young sitter shown in this delicate portrait by John Smart, bears a strong resemblance to two other portraits by him, seemingly of the same child. Dressed in a white smock, with buttons and ribbons criss-crossing the bodice and a blue sash at the waist, this same outfit can be seen on other portraits from the 1760s, including a drawing in a private collection and a miniature dated 1765 (Nationalmuseum, Stockholm).

The white smock and blue sash worn by the child are items of clothing usually sported by boys of this date. However, while these portraits have been named by various writers as a son of John Smart who likely died young this is highly unlikely to be the case.[1] While there is no baptismal record of a son born to Smart at this date, research undertaken in 2014 revealed a record of a daughter, named Maria Sophia, born to John and Mary[anne] (‘Marianne’, Smart’s first wife) in January 1763.[2] The couple did not marry until later in this year, and it is possible that the birth of this first child necessitated the formalisation of their relationship. Two further daughters were born who lived to adulthood – Anna Maria born in 1766 and Sophia in 1768. As there are no further records of the child born in 1763, it can be assumed that they died young.

Marianne Smart appears to have left John to elope with William Pars (1742-1782), a topographical artist and contemporary of John. Described in the ‘Memoirs of Thomas Jones’ as a ‘high spirited, handsome Girl’ who Smart had ‘picked up at one of the Bagnios about Covent Garden’, Marianne died in Rome where she had moved with Pars in 1776. It seems that John and Marianne’s two surviving daughters stayed with their father in London, aged ten and eight years old at the time of their absent mother’s death.

Smart painted and drew all his children and grandchildren – their images revealing a gentler side to the punctilious, financially driven artist, known for his productiveness and single-minded attitude. The portraits of his teenage daughters reveal a more playful and ambitious artist – for example, the portrait of his daughter Anna Maria, painted in Madras in 1787, shows her holding a veil over her dark brown hair in recognition of local customs.

While it is not possible to identify the sitter here, it is a fascinating addition to the relatively small volume of extant portraits from the first decade of Smart’s career. Smart had begun his independent professional career by 1760, with no evidence of time spent (as was usual) as apprentice to another artist. His work from the 1760s shows an artist finding his style, with the present work demonstrating the delicate touch, careful palette and forensic attention to detail which would characterise the rest of his career. Forty-two years after the birth of his first child, Smart became a father for the last time.[3] His son, John James, was born in 1805, the mother Smart’s second wife, Mary Morton (1783-1851). In 1807 he painted John James as a chubby toddler, using the brighter palette and larger ivory surface of the early 19th century. This healthy-looking boy, with his ruddy cheeks, was perhaps representative of the now wealthy and established artist. In 1804 Smart had moved to the affluent London area of Fitzrovia and continued to exhibit at the Royal Academy right up until his death, following a short illness, on 1st May 1811.

This artwork has been registered by Philip Mould and Company as qualifying as exempt from the ivory act. Please contact [email protected] if you have any further queries.

[1] Both G.C. Williamson and D. Foskett maintain this as ‘fact’ in their literature on John Smart.

[2] The idea that John and Marianne Smart had a son named ‘John’, born circa 1762, appears to originate with G. C. Williamson, who names the miniature of a child dated 1765, now in the Nationalmuseum, Stockholm as such. Williamson illustrates this miniature in his book ‘Portrait Miniatures’ (1897, p. 49), when it was in the possession of a Mr. E. M. Hodgkinson. Research undertaken by Lawrence Hendra when researching for the exhibition ‘John Smart; A Genius Magnified’ in 2014 found no evidence of the birth of a son at this date and nothing further to substantiate Williamson’s assertions.

[3] Smart had another son, this time out of wedlock, with Sarah Midgeley. Confusingly also named ‘John’, this child grew up to follow in his father’s footsteps and is widely known as ‘John Smart Junior’ (1776-1809).