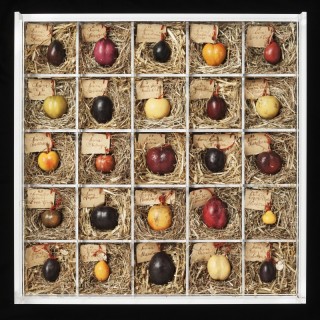 A COLLECTION OF WAX MODELS OF PLUMS

These realistic wax models of many different types of plum were made in the 19th century by Francis Garnier Valetti whose perfect specimens won numerous awards and were collected not only by teaching institutions but lead him to St. Petersburg where he was employed to create exquisite fruit at the court of the Tsar Nicholas I.

On returning to Turin, Italy in 1848 he began to exhibit the models at fairs throughout Europe which lead to at least 32 medals and in 1878, he was awarded Knight of the Order of the Crown of Italy by King Umberto I

Initially Valetti had made the models for didactic purposes, for scientific study, and they were bought, amongst others, by by Prince Henry of Orange who exhibited them in Amsterdam, by the Imperial Museum in Berlin and as far afield as Melbourne where they were purchased by the Museum of Agriculture. However, they were also acquired by amateur scientists as well as collectors who were stunned by their exquisite perfection.

A COLLECTION OF WAX MODELS OF PLUMS