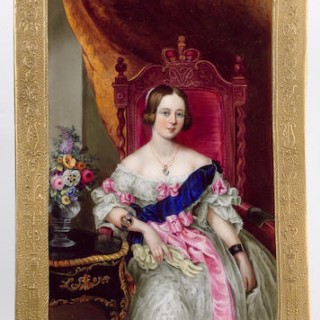 wearing a portrait miniature of Prince Albert on her wrist, (after a miniature by Ross of Prince Albert) vase of flowers by her side, within an elaborate border of raised-paste gilding, printed garter mark ‘MANUFACTURED BY CHARLES MEIGH & SON HANLEY ENGLAND’, impressed mark ‘DAVENPORT.PATENT’

The portrait is after Sir William Charles Ross’s portrait, circa 1840, from a print published in 1841. Ross produced a body of more than 50 miniatures for Queen Victoria and Prince Albert between 1846 and his death in 1860.

Charles Meigh and Son were makers of earthenware although they experimented with porcelain and exhibited at the Great Exhibition of 1851. Davenport supplied their ‘patent’ plaques to independent decorators and other manufacturers unable to make thin plaques of their own. This finely painted plaque may well have been shown by Charles Meigh at the Great Exhibition, perhaps in the hope of attracting royal patronage.

Throughout her life Queen Victoria used the portrait miniature in the traditional way- as a token of regard for the living and of remembrance for the dead. She gave many miniatures of herself to her family as tokens of affection. She also presented miniatures to her Ladies-of the Bedchamber. The pleasure she derived from receiving as well as giving portrait miniatures meant that she was often given them as birthday or Christmas gifts.

The Queen’s favourite method of wearing miniatures was in a bracelet as seen in the present portrait. 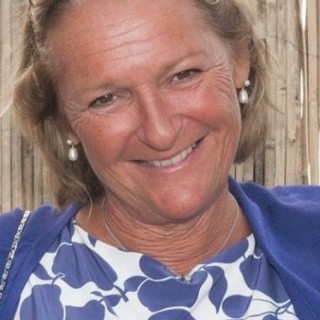