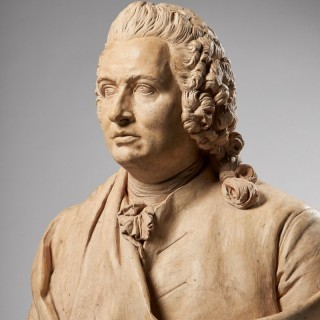 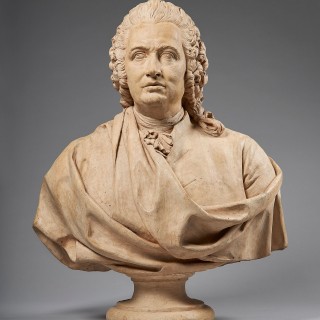 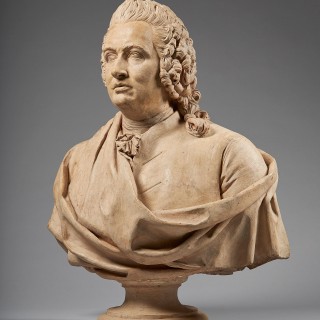 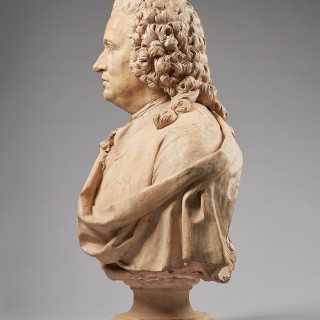 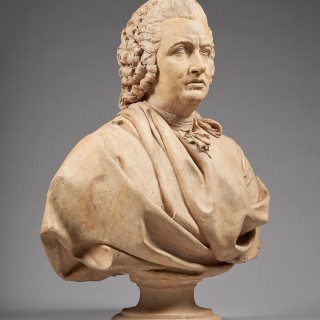 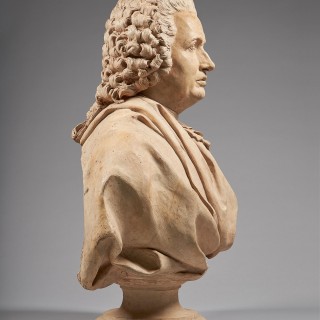 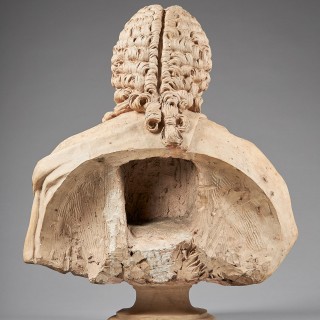 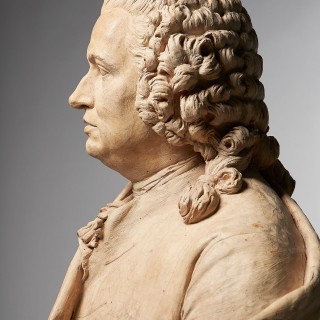 A Fine 18th Century French Terracotta Bust of a Gentleman

Jean-Baptiste II Lemoyne was the most successful French portrait sculptor of his generation and famous for his distinctive new style of portraiture à la française. His portraits of the great and the good of French society – courtiers, magistrates, entrepreneurs, artists and Enlightenment thinkers – provide some of the liveliest and most memorable portrayals of the outstanding French men and women of his day.

The present unsigned bust of a gentleman – who, judging by his attire, was almost certainly an important professional man – is typical of Lemoyne’s portraits in terracotta (his preferred medium) both in terms of its style and the high-quality execution, thereby allowing us to make a strong attribution to Lemoyne.

Lemoyne exhibited his first busts in his favourite medium of terracotta at the Salon of 1738. His portraits in terracotta are characterised by their expressive portrayal of the sitter’s facial features, which are enhanced by the free-flowing, often unfussy modelling of the hair, clothing and any decorations that the sitter may be wearing. Whilst his general style stayed constant throughout his career, the dress and truncation of the busts vary from sitter to sitter, depending upon the sitter’s status and the desired effect.

In the present bust, the dress consists of a coat and small cravat tied around the neck to the front, below a large mantle falling over the right shoulder in heavy folds and moving in an arc down to the lower left shoulder, marking him as a professional man of science, letters or the arts. The bust can be compared to several other portraits of professional men by Lemoyne, such as his bust of the architect Ange-Jacques Gabriel (c.1760: Paris, Louvre) and most notably his terracotta bust of the military financier Joseph Paris Duverney (1759: Brunoy, Musée Robert Dubois-Corneau). In the latter bust of Paris Duverney, the sitter’s slashed coat and the execution of the heavy folds of the mantle, which fall in a similar (albeit slightly more windswept) fashion over the right shoulder and back around the left side of the bust, are comparable to the handling of the clothing in the present bust.

Examination of the head and facial features of the present bust reveals the original details of the modelling, such as the furrowed brows, the gently opening lips and the well-drawn nose. In particular, the fine modelling of the curls of the wig, which twist in a range of sizes and directions, particularly on the side of the head, is indicative of Lemoyne’s masterly work in terracotta and is comparable to the expressive execution of the wig on, for example, his bust of Florent de Vallières (1751: Musée de Tours). The manner of incising the eyes, meanwhile, where the pupils are suggested by a gouged, down-turned half-moon shape, within the round incision of the irises in lower relief, is also similar to the method used in many other busts by Lemoyne,.

The present bust is an impressive example of Lemoyne’s oeuvre in terracotta, and, the many qualities and characteristics it shares with other busts by him from this period, support a strong attribution to ‘le sculpteur du roi’.

A Fine 18th Century French Terracotta Bust of a Gentleman