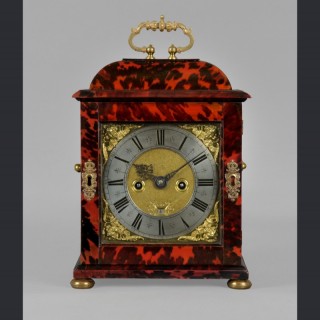 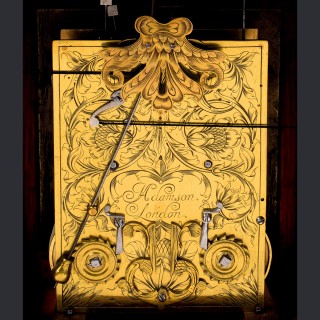 A fine and small James II quarter repeating spring table clock. The case is veneered in red turtle shell and stands on brass bun feet with an elaborate brass handle to the cushion moulded caddy. There are matching escutcheons to either side of the door.

The 6 inch square brass dial is mounted with winged cherub spandrels and a silvered chapter ring. The centre of the dial plate is finely matted with ringed winding holes and delicate scroll engraving between the spandrels. Above six o’clock is an aperture to view the day of the month and above twelve o’clock is a strike/silent option.

The two train fusée movement has a verge escapement and pull quarter repeat with the quarters sounded on two bells and the hours on a separate bell. The quarter repeat mechanism is operable from either side of the case. The back plate is engraved in the early style with scrolling leaves and thistles around the maker’s signature, H Adamson, London. It is a particularly interesting signature as the H and the A are intertwined.

Humfry Adamson is recorded as working in London during the second half of the seventeenth century. In 1668 he made a clock for Whitehall Chapel at a cost of £19.7s0d. He appears to have specialised in turtle shell table clocks, one of which was included in the Wetherfield Collection and is also illustrated in Britten’s sixth edition. Two other similar clocks are known to have passed through the hands of R A Lee.