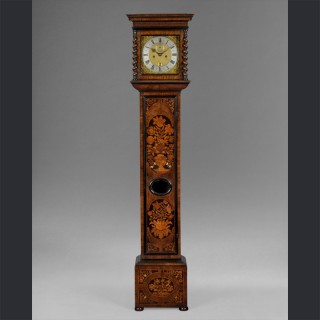 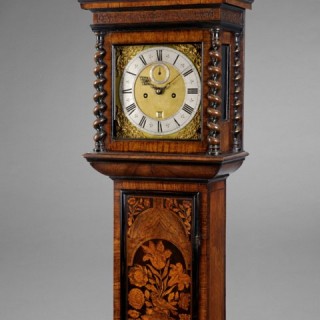 A fine and small seventeenth century longcase clock dating from the period of William & Mary. The case, which stands on bun feet, is veneered in walnut with inset panels of bird and floral marquetry against an ebony background to the base and trunk. To contrast with the walnut, alternate mouldings are ebonised. The rise-up hood is flanked by barley twists columns rising to a flat top.

The ten inch square dial is mounted with a silvered chapter ring, subsidiary seconds ring and cherub and foliage spandrels to the four corners. There is an aperture to view the day of the month and the dial plate is signed by the maker beneath six o�clock.
The six pillar eight day movement has outside countwheel striking on a bell and the clock is complete with brass cased weights and pendulum.

Jacobus Markwick (Jacobus is Latin for James) was an eminent maker who was apprenticed in 1656 and Free of the Clockmakers Company in 1666. He worked in London until 1698 and made watches as well as making clocks. Examples of his work are included in the Victoria & Albert Museum, The Wetherfield Collection and the National Museum in Stockholm.