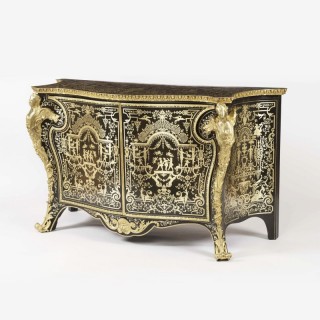 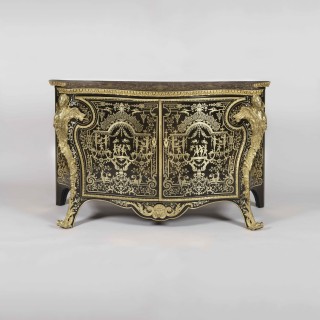 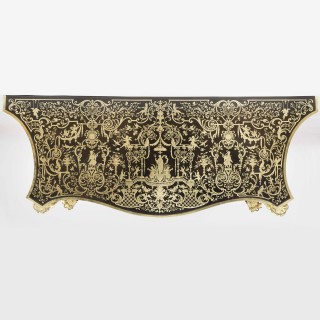 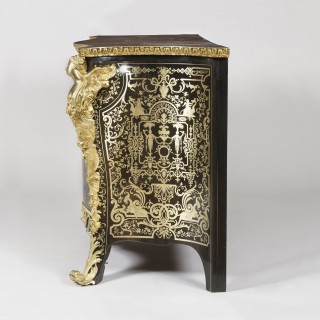 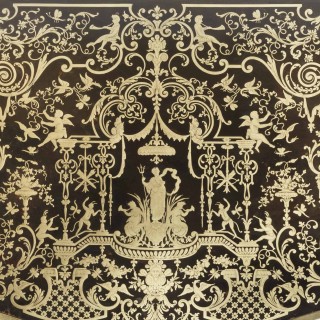 Of serpentine form, constructed in ebony with premier-partie inlay into tortoise shell, using designs in the manner of Jean Berain the Elder (1640-1711), and decorated with bold ormolu mounts; rising from scrolled feet either side of the swept apron, and issuing espagnolettes terminating in winged female busts, enclosing shaped ormolu shod doors, with the platform edge dressed with an ormolu egg and dart running mount. Signed by the maker.
Circa 1870

French born, Charles Mellier moved to England, worked for, and eventually took over the illustrious Anglo-French cabinet makers Monbro and Company, circa 1870. Working from Frith Street and later Margaret Street, he soon became a major force in designing and making furniture, and executing grand decorative schemes. The company furnished the great cross- Atlantic liner Mauretania and exhibited at the 1904 International Exhibition in St Louis.

André-Charles Boulle (1642-1732) was received as a Maître Ébéniste in 1666, quickly becoming known as ‘the most skilful artisan in Paris’, and was appointed ‘Ébéniste du Roi’ in 1672, when he became a resident of the Louvre Palace, and was granted the especial privilege of being permitted to work in both bronze and wood. Although not the inventor of the method of inlaying the combination of ebony, tortoiseshell and brass, his ability and creative ability in the medium became at once associated with the patrynomic, ‘Boulle’ and many of his masterpieces, which are represented in many museums and prestigious Royal collections throughout the world.