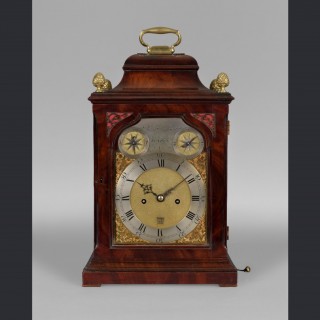 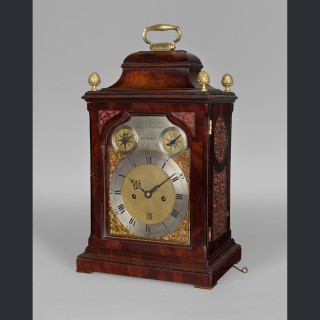 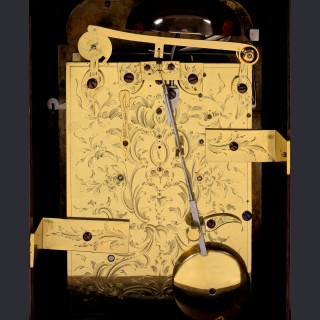 A fine George III bracket clock in a “bell top” case. The small case, which stands on moulded feet, is veneered in richly figured mahogany and rises to a brass carrying handle flanked by four brass acorn finials. The case includes pierced mahogany sound frets to the front and sides. The unusual “ogee” shaped brass dial is laid out with two subsidiary dials for rise and fall regulation and strike/silent option flanking a large plaque signed by the maker John Jackson London. The narrow silvered chapter ring, which adds to the overall elegance of the dial, is flanked by four corner rococo spandrels. The centre of the dial is finely matted with an aperture to view the day of the month.

The high quality, two train five pillar movement has a duration of eight days and includes a verge escapement. The hours are sounded on a bell and can be repeated at will via the pull cord. The back plate of the movement is delicately engraved in a rococo design.

John Jackson was a very fine clockmaker who is recorded as being apprenticed to Nathanael Style before establishing his own business in Bridgewater Square. He was appointed Master in 1796 and was eventually succeeded by his son of the same name.