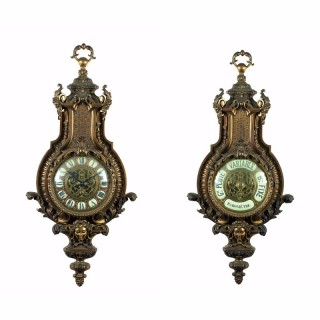 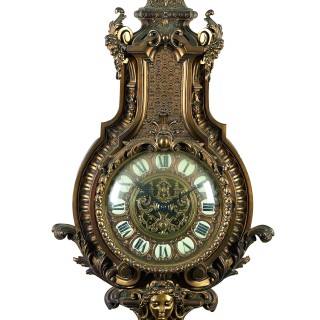 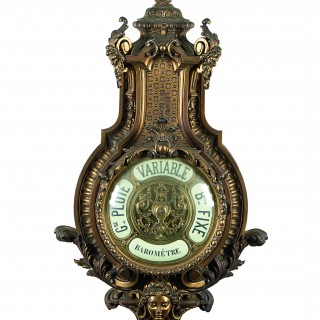 A fine Louis XIV style ormolu clock and barometer set by A. Beurdeley

Each encased within an ormolu frame, with circular enamel dials, the clock with roman numerals, the barometer with the inscriptions ‘G-de Pluie/Variable/B-ao Fixe/Baromètre’, both profusely decorated with scrolling leaves, masks and egg and dart patterns, ending with pine cone finials, marked ‘BD/941’ to the backplate of the barometer.

Born in 1847, Alfred Beurdeley, took over his father’s business in 1875. The shop was located at the Pavillon de Hanovre, while is workshops were at 20 & 24 rue Dautancourt, Paris. He specialised in producing the most luxurious articles to the highest quality and was pre­eminent among the Parisian bnistes, especially for the refinement of his ormolu, which was the best in Paris. He exhibited at the major International Exhibitions, such as Paris in 1878 and Amsterdam in 1883, and was awarded the Gold Medal at the Paris Exposition Universelle of 1889.

A fine Louis XIV style ormolu clock and barometer set by A. Beurdeley