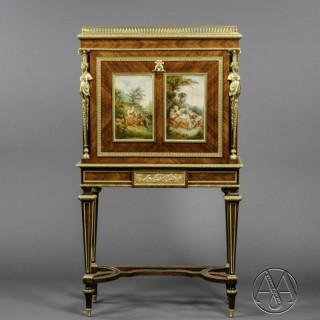 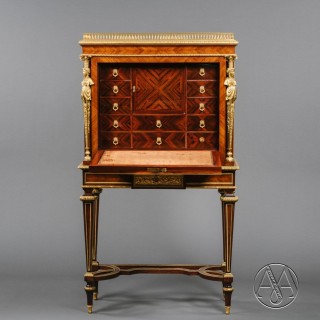 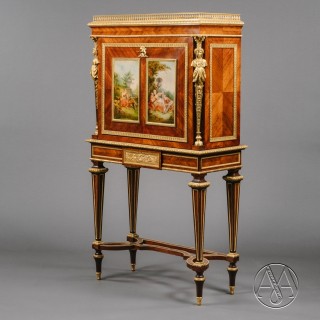 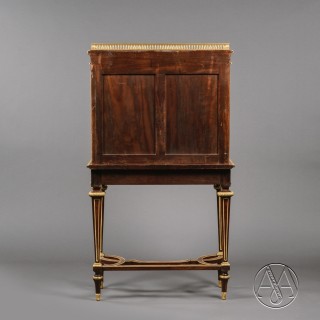 Stamped to the reverse of the bronze mounts ‘HPR’ for the ‘bronzier’ Henri Picard.

This superb secretaire cabinet has a rectangular three-quarter top galleried top above a fall front with gilt-bronze stiff leaf borders framing a pair of finely painted vernis Martin panels depicting pastoral scenes in the manner of Boucher. The fall front opens to reveal a fitted interior with a cupboard and drawers with fine crossbanded veneers, lion head handles and a velvet covered writing surface. The projecting front angles mounted with finely cast and chiselled basket-bearing cayatids above a lower section with a central drawer mounted with a plaque of allegorcal putti. Raised on tapering square section legs united by an interlaced stretcher and toupie feet.

The gilt-bronze mounts of are exceptional quality finely cast and chiseled and retaining their original gilding. They are stamped to the reverse ‘HPR’ for the important Parisian fondeur and doreur Heni Picard who worked extensively for Emperor Napoleon III.

The design for the secretaire is almost certainly inspired by the important eighteenth century secretaire by Adam Weisweiler from 1787 in the Wallace Collection, London (F308). Of similar form with identical caryatid mounts and mounted with two Sevres porcelain plaques of pastoral scenes, the Wallace collection secretaire was exhibited at the ‘Musee Retrospectif’ of 1865 and Bethnal Green exhibition between 1872 -75. Many of the most important Parisian ebenistes of the late 19th century visited these exhibitions, drawing inspiration from works by the most celebrated makers active during the ancien regieme.

The important fondeur and doreur Henri Picard worked in Paris from 1831 to 1884, most notably for the Emperor Napoléon III. He was based in Paris at 6 rue Jarente from 1831 to 1839, before moving to 10 rue de la Perle. The firm was active until around 1890.

Celebrated for the high quality of his production, Henri Picard supplied many important patrons, including garnitures and table pieces for the petits appartements of Emperor Napoléon III at the Louvre. An important pair of twelve-light candelabra by Picard remain in the Musée du Louvre today.

the bronze mounts by henry picard