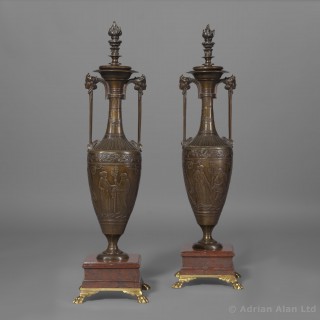 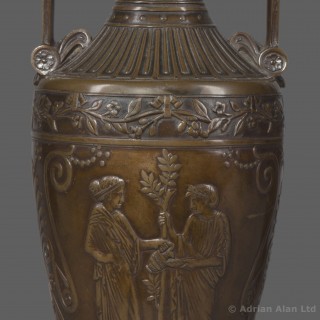 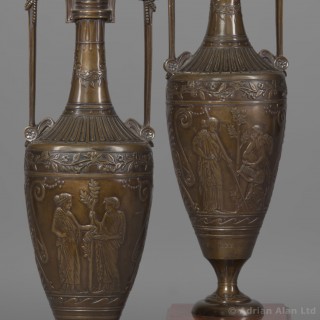 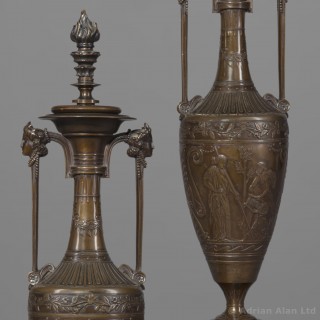 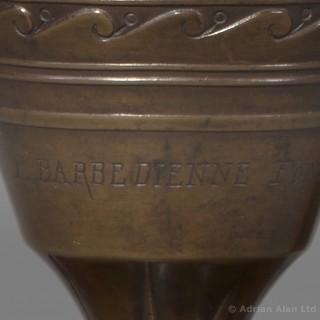 This exceptional pair of patinated bronze urns was designed in the fashionable néo-grec style by the Parisian sculptor Henry Cahieux and cast by the fondeur Ferdinand Barbedienne.

This model of vase was exhibited by Barbedienne at the 1855 Paris Exposition Universelle to great acclaim. They were illustrated in the Exhibition Catalogue alongside a classical revival tripod. The pair of vases together with another were described as follows: The two vases (…) selected from many exquisite and beautiful decorative works in bronze from the atelier of Messrs. Barbedienne & Cie, of Paris; they are formed, and ornamented, on the best models of the ancient Greek.

The Parisian sculptor Henry Cahieux (1825-1854) is recorded as having supplied the celebrated Barbedienne foundry with exclusive master models for casting in bronze including, bas-reliefs in the néo-grec, Egyptian and Japanese styles. He exhibited at the Salon between 1850 and 1853, his work always cast by Ferdinand Barbedienne.

The Parisian ébéniste and fondeur Ferdinand Barbedienne (1810-1892) was a highly important and prolific bronze founder of one of the most important French art foundries. He had his main shop in 30, boulevard Poissonnière and his studios were established at 63, rue de Lancry. He pioneered the use of mounts and, more commonly, bronze sculpture including figures and animals. Barbedienne produced catalogues of bronze reproductions of Greek and Roman classical sculpture and experimented with champlevé and cloisonné enamels during the third quarter of the century. Barbedienne exhibited several pieces of furniture at the 1855 Paris Exhibition.