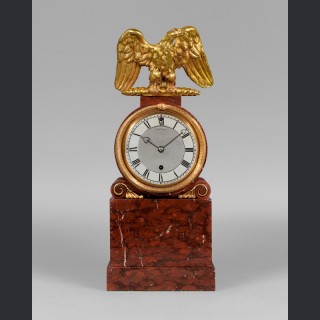 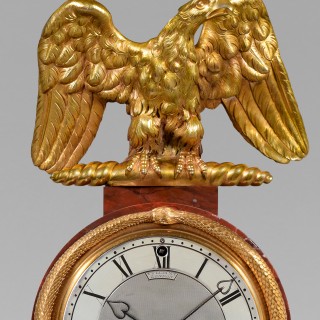 A fine regency mantel timepiece in a rouge marble and ormolu case by Vulliamy No. 598, London c1810

A fine regency mantel timepiece in a rouge marble and ormolu case. Standing on a pedestal base with a pair of volutes supporting the drum shaped housing to the movement. There is an ormolu snake bezel around the sold silver dial with a finely matted centre and plain chapter ring engraved with roman numerals. Within the 12 0’clock signature is an aperture to adjust the rise and fall regulation for timekeeping. Beneath 12 o’clock is a polished plaque signed by the maker Vulliamy London. The delicate pointers are of blued steel with typical Vulliamy heart shaped tips. Above the drum housing is a small pedestal supporting an ormolu eagle.

The single fusée high quality movement has a half deadbeat escapement and is signed and numbered on the backplate Vulliamy London 598.

Justin Vulliamy arrived in London c1730. He married the daughter of Benjamin Gray and later joined his father-in-law in partnership at Gray’s already established business in Pall Mall. In doing so he inherited the Royal Warrant bestowed upon Gray by George II in 1744. This warrant stayed with the House of Vulliamy until the death of Benjamin Lewis Vulliamy in 1854 – an unprecedented duration.

In 1775 Justin’s son Benjamin was apprenticed to his father and became free in 1781. Benjamin made many fine clocks for his patron, King George III, establishing a numbering system. We are fortunate that many of the records from the Vulliamy workshop still exist today, providing important and historical information on their clocks and their owners. Benjamin’s son, Benjamin Lewis Vulliamy, was born in 1780 and was free of the Clockmaker’s Company in 1809 following his apprenticeship with his father. Like his predecessors, he was an eminent maker and carried forward the numbering series instigated by his father. He made many wonderful clocks for the Royal Household and the aristocracy, specialising in precision clocks and pioneering the development of the English carriage clock. Examples of clocks by the Vulliamy family can be found in The Science Museum, Buckingham Palace and Windsor Castle.

A fine regency mantel timepiece in a rouge marble and ormolu case by Vulliamy No. 598, London c1810