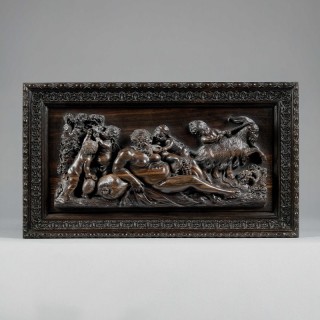 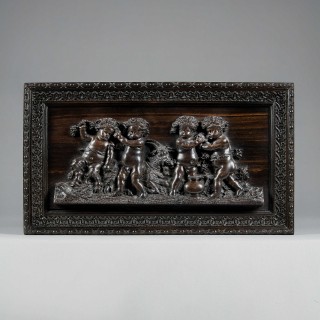 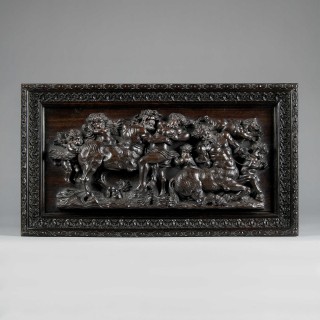 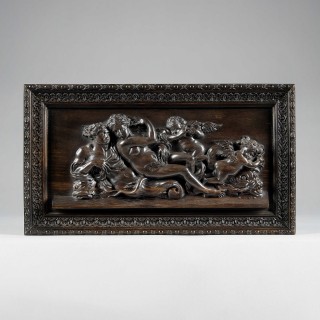 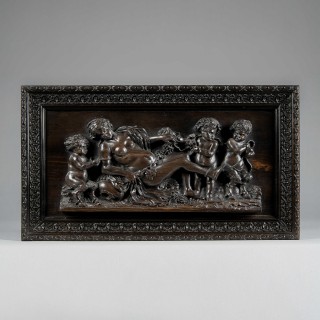 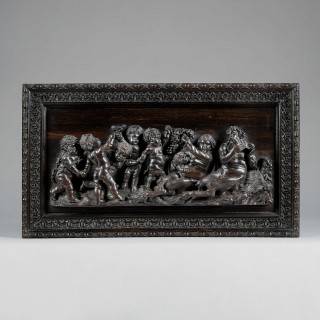 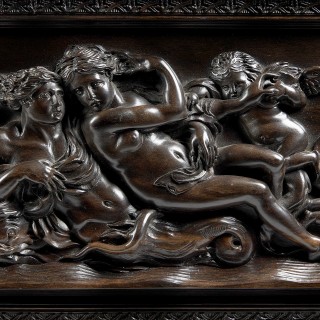 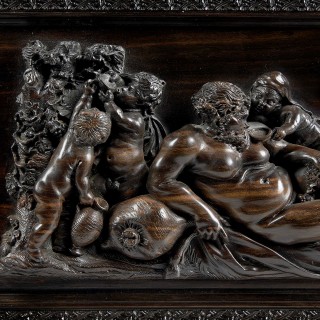 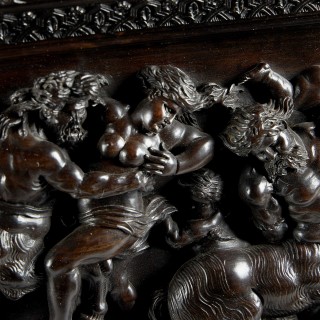 This fine and apparently unique set of carved mythological panels relates to six corresponding reliefs by the seventeenth-century Flemish sculptor Gérard van Opstal, who worked in Paris during the early part of the reign of Louis XIV (1638-1715). Van Opstal specialised in small-scale sculpture in relief, mostly in ivory and usually depicting scenes of Bacchanalian revelry featuring mischievous putti and pagan gods.

The high quality of the present panels, together with the style of the frames they are displayed within, suggest that they were made by a Parisian workshop specialising in ébèniste furniture in the nineteenth century. They were probably made as luxury objects for display on a wall or in a wealthy patron’s private studiolo, although it is also possible that they were originally intended to be part of a cabinet or other piece of furniture, but were later adapted into objets d’art.

The choice of material, ebony, is an expensive type of hardwood from Africa, the East Indies or South Asia, which was fashionable in Europe from the seventeenth century. Such high-quality panels in this type of material (which is incredibly difficult to carve without specialist tools) are likely to have been executed in a specialist ébèniste workshop. The most famous and renowned ébènistes operated in Paris in pre-Revolutionary France; although many were disbanded following the Revolution, they were later revived during the reign of Napoleon III (1852-70) and carried on producing cabinets and other types of furniture in the pre-Revolutionary or Revivalist styles into the early twentieth century.

Of the six ivories by van Opstal which share the same composition and narrative groupings as the present set, five are in the Louvre and the other is in the Rijsmuseum. The first panel, The Drunken Silenus and four Putti, is based on an ivory in the Louvre (Inv. MR 360), which is regarded by Phillipe Malgouyres as van Opstal’s masterpiece in terms of both its quality and harmony of composition. The second panel, A Bacchanal of three Putti and an infant Satyr holding a goat, is based on another ivory in the Louvre (Inv. MR 361).

The third relief, Five Putti defending a Nymph against two Centaurs, is the most action-packed and complex composition in the set. The twisting bodies of the Centaurs and Nymph are inspired by Mannerist prototypes, such as Giambologna’s Rape of a Sabine Woman (Loggia dei Lanzi, c.1583, Florence). In the fourth relief, A Triton embracing a Naiad with two Putti, the composition is closely related to an engraving by Theodore van Kessel, which in its turn was based on a design by Peter Paul Rubens (1577-1640), showing the influence of contemporary Flemish Baroque painting during van Opstal’s training and on his later career as a sculptor.

The fifth panel of this set, A Nymph enchained by two infant Satyrs and a Putti, shows a similar-looking female figure to the previous panel, here probably intended to portray a wood-Nymph (rather than a Naiad), who reclines on a gadrooned vase. The lacuna on the far right side of the original ivory – where the section of rope held by the putto on the far right is largely missing – has been convincingly replaced in the ebony version of this group. The final relief of a Bacchanal of Satyrs and Cupids is based on another ivory in the Rijksmuseum (Object no. BK-NM-2934), which was acquired by that museum in 1876 but seems to have first been documented in 1863.

Gérard van Opstal was born in Brussels in 1605 and trained in that city under Nicolaes Diedon before moving to Antwerp in 1635, where he became a member of the Master’s Guild. From 1642 and for the rest of his career he worked in France, mostly for the young Louis XIV (1638-1715). By 1648 he must have already been well-established in Paris, for in that year he co-founded the Académie Royale de Peinture et de Sculpture and by 1651 he was appointed ‘sculpteur des batiments du roi’, shortly after the death of his fellow Flemish sculptor, François Dusquesnoy (1597-1643), whose classicising Baroque style was a strong influence on van Opstal. Although van Opstal specialised in relief sculpture in ivory, he also worked in marble, stone and wood.

Van Opstal’s preference for pagan scenes incorporating putto and other strange gods or creatures was also heavily influenced by Dusquesnoy, his predecessor at the French Court. All of the narrative groups in the present set of carved ebony panels depict such themes of Bacchanalian revelry, battle or eroticism, and their high-quality execution makes them closely resemble van Opstal’s finest relief work in ivory.

Available as a set of six or in pairs. Each presented in a carved ebony frame, the outer moulding consisting of beads within a diamond cartouche separated by rosettes, the inner border design consisting of leaves and bunches of fruit separated by interlacing strapwork. With metal wires on reverse for wall mounting.

[Please note, we offer free delivery of this item within London and the Home Counties. We can provide quotes for shipping elsewhere in the UK and overseas]

Very good condition overall. The fourth panel of the set has a small crack to the upper right corner of the background.