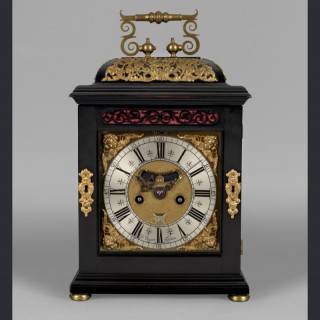 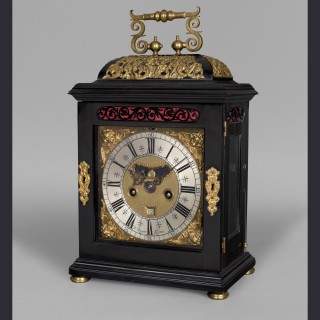 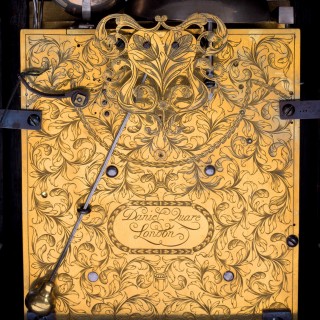 A fine William and Mary quarter repeating spring table clock in an ebony domed top case with gilt brass mounts. The ebony veneered case with matching escutcheons to the door, stands on turned bun feet and rises to the domed caddy top supporting a typical large Quare handle. The caddy is mounted to all four sides with sharply cast and gilded mounts depicting serpents amongst foliage.

The 6¼ inch (16cm) square brass dial is mounted with a silvered chapter ring and winged cherub spandrels. The centre is finely matted with ringed winding holes and a false pendulum aperture and date aperture, both embossed with Quaker style decorations. The blued steel pointers are finely pierced and faceted. The eight-day duration movement repeats the quarters on four bells and the hours are sounded on a separate bell. The escapement is verge and the backplate is beautifully engraved with scrolls of leaves around the maker’s signature Daniel Quare London.

Daniel Quare was born a Quaker in 1647 in Somerset. Little is known about his early life, but in 1671 he became a Brother of the Clockmaker’s Company, working in St Martins le Grand before moving to The Kings Arms, Exchange Alley. He was a prolific maker of clocks, watches and barometers, who occasionally collaborated with his contemporaries to make some of the finest clocks of his period. At his best he was supreme, and, like his peer Thomas Tompion, examples of his work still grace palaces and museums around the world. He was patronised by royalty and the aristocracy and is credited with several inventions. In 1708 he served as Master of the Clockmaker’s Company and soon afterwards took into partnership Stephen Horseman, who had earlier been his apprentice.

Examples of Quare’s work can be found at The British Museum, The Victoria & Albert Museum, The Science Museum, Hampton Court and the MMA, New York.