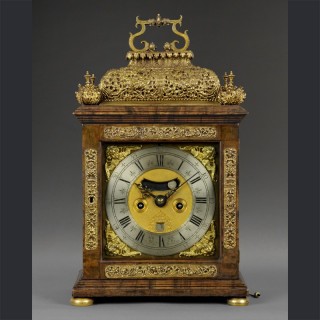 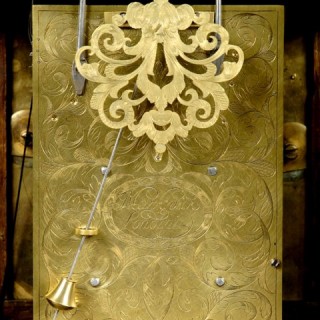 A fine William and Mary quarter repeating spring table clock veneered with kingwood. The flamboyant case stands on brass bun feet with repoussé mounts to the door and a repoussé basket top supporting the carrying handle. The basket is flanked to the four corners with unusual four leaf finials.

The 7 in (18 cm) square dial is mounted with wing cherub spandrels and silvered chapter ring with strike/silent option above. There is a false pendulum aperture, ringed winding holes and date aperture to the matted centre.

The two train fusée eight day duration movement has quarter repeating on three bells with the hours sounded on a separate bell. The escapement is verge and the backplate is engraved with scroll foliage. Both backplate and chapter ring are signed Marwick, London.