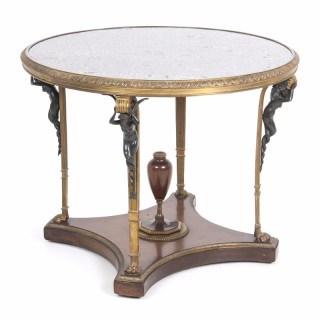 After the model by Adam Weisweiler (French, 1744-1820) and Pierre-Philippe Thomire (French, 1751-1843)
The circular marble top within an ormolu egg and dart band, raised on four ormolu feet with patinated bronze caryatides at each top, ending on paw feet, joined on a squared wooden platform centered by an urn, stamped under the bronzes ‘ZJ’.

The original model of this table, made by Adam Weisweiler and Pierre-Philippe Thomire, remains at the Chateau de Fontainebleau in France, where it was delivered by Rocheux in 1810
Literature: J. P. Samoyault, Meubles entrés sous le Premier Empire, p. 248, no. 176.
Maison Jansen was founded in Paris in 1880 by Jean-Henri Jansen (1854-1928). Towards the end of the Century, Jansen bought some of the master models of the celebrated furniture maker Joseph-Emmanuel Zwiener (1849-1895) and continued his production under the sub-firm Zwiener Jansen Successeur, marking the bronze mounts ‘ZJ’.