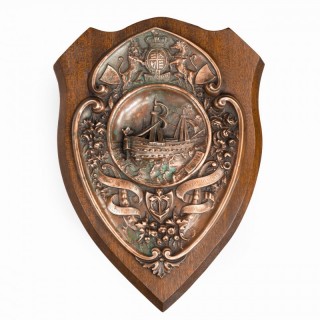 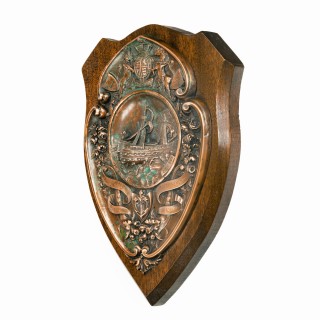 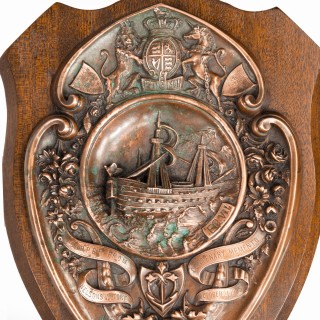 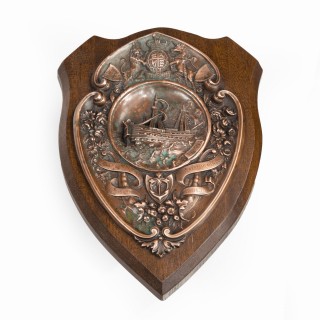 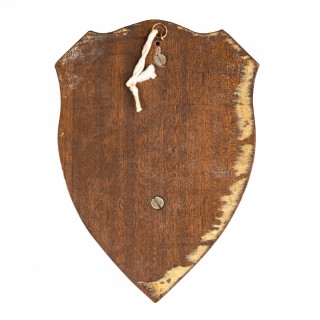 A HMS Victory centennial copper shield, the embossed copper plaque with the coat of arms of Great Britain flanked by two shields, one reading ‘British & Foreign Sailors’ Society’ and ‘From the Lords of the Admiralty’ above a central roundel showing the famous battleship and the initials ‘ER VII’, all against a field of flowers with four ribbons incised ‘Copper from Nelson’s Victory’ and ‘Centenary Memento October 21 1805’ English, 1905.

Footnote: On 21 October 1805, the Royal Navy fleet of Admiral Lord Horatio Nelson met and defeated the combined French and Spanish fleets off Cape Trafalgar, Spain. Nelson was killed during the battle, but Napoleon’s naval power was smashed and never recovered. This victory left Britain as ruler of the world’s seas and led to the eventual end of the Napoleonic Wars. 1905 marked the centenary of Trafalgar. One major preparation for the centennial year, however, was the restoration of HMS VICTORY, Nelson’s flagship. Funds were raised for the many special activities and events by selling memorabilia (medals, badges, busts, etc.) made using VICTORY’s recycled copper hull sheeting. “Victory Shields” were made available to schools in Britain and Canada (at a cost of £5, 5s each) by the British & Foreign Sailors’ Society (B.F.F.S.), to be awarded annually to a successful student, or “Warden”. King Edward VII was a great supporter of the centenary project and allowed his name to be included on the shields.