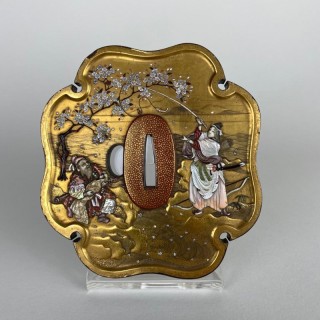 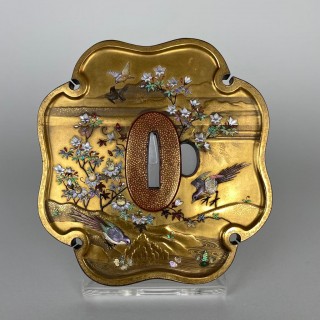 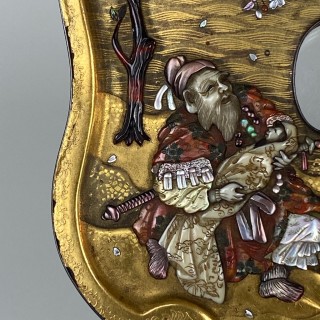 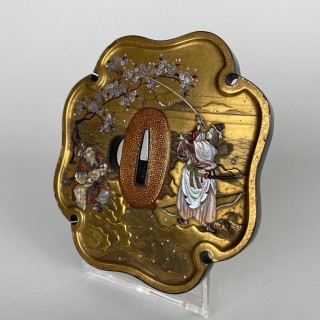 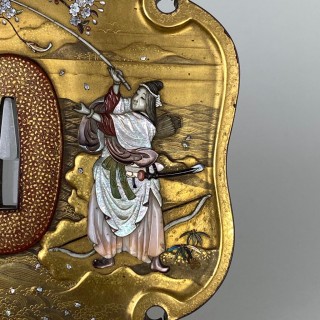 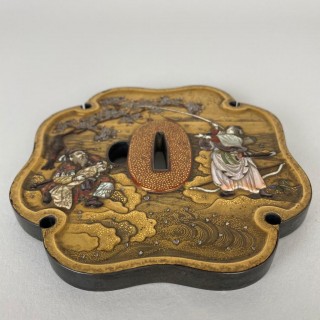 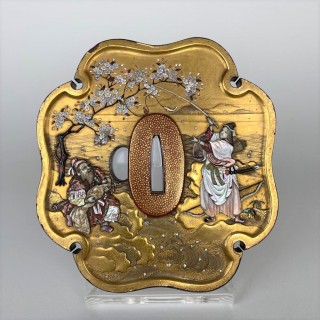 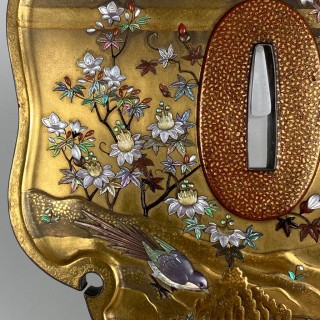 A Japanese Meiji Period (1868-1912) Gold lacquer tsuba with Shibayama style decoration of an elderly warrior and baby under a cherry tree, an androgynous deity, possibly Benten fishes for them. Bluebirds among flowering shrubs decorate the reverse.

Cherry blossom is a well known symbol of Japan, it is beautiful but fleeting, it represents spring, a time of renewal and reminds us of the fleeting nature of life.

The famous samurai of Japan were a hereditary military nobility caste who help to shape and rule Japan from the 12th Century to their abolition in the Meiji period. In Japan samurai are known as bushi (meaning warrior) they we’re usually associated with a clan or lord and were highly trained officers in combat and strategy. They lived by the code of bushido (way of the warrior) which was Confucian in origin, and taught loyalty, self discipline and respect. They used many weapons including spears, bows and arrows and later on guns, but they are most famous for their swords. The Japanese Samurai blade is made by laminating metal (repeatedly folding) to create a very sharp but brittle edge which could then be combined with a central strip of stronger metal to create a blade. Despite being the best known use of this technique Japan only adopted it in the 1200’s, Western civilizations such as the Celts had been using this method 2000 years before. The right to own and wear swords in public was a privilege granted only to the Samurai, they would usually wear a Daisho (pair) of swords, one larger than the other, there are many sizes and classes of samurai swords but the most common pairing would be the Katana and the Wakizashi.

Benten is the only female god of the lucky seven, she is the God of all things that flow; time, words, speech, music, knowledge and water. In Japan water and dragons are intrinsically linked so you will often find her accompanied by a dragon or occasionally a snake. She sometimes carries a biwa (traditional Japanese lute) to represent her patronage of the arts and her figure may be shown with a Torii, the gate found at the entrance of a Shinto shrine. Her origins are in the Hindu Godess Saraswati who represents similar things to the Japanese version and helps to maintain the balance of the universe.

The bluebird is a symbol of happiness which dates back many thousands of years.