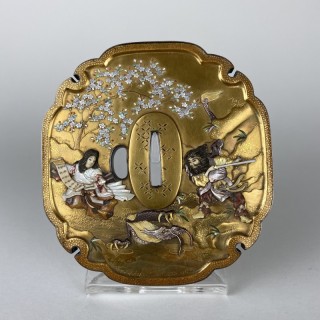 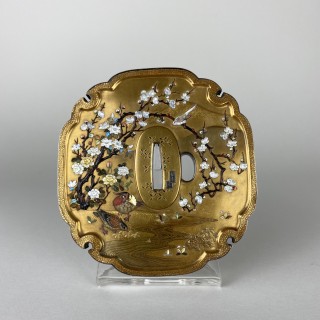 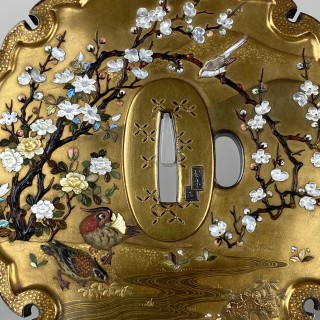 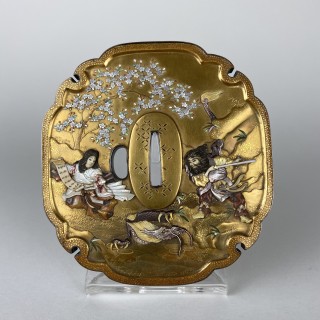 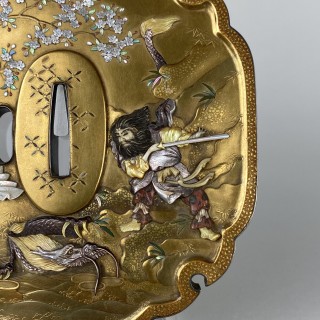 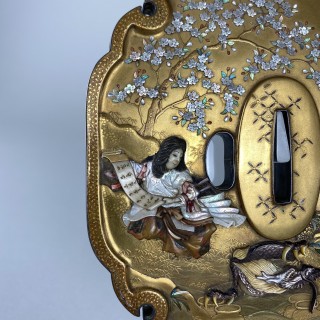 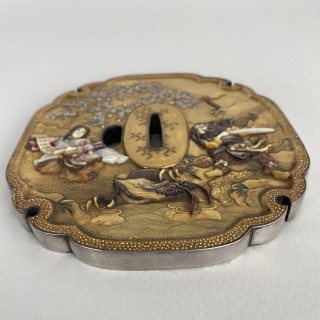 A Japanese Meiji Period (1869-1912) gold lacquer tsuba with Shibayama style decoration of two figures, likely Benten and Bishamonten, with a dragon under a cherry blossom tree. Quail under another blossom tree decorate the reverse.

Bishamonten is stately god whose origins come from the Hindu God Kubera one of the four heavenly kings, a group of gods seen in both Buddist and Hindu beliefs. He is dressed in armour and holds a spear in one hand and a model of a pagoda in the other, symbolising protection of the divine treasure house, sometimes he is surrounded by a ring of fire. He is the God of war but is also an enforcer of fairness and rules, and is guardian of the places where the Buddha teaches earning him the name Tamonten, listening to many teachings.

Benten is the only female god of the lucky seven, she is the God of all things that flow; time, words, speech, music, knowledge and water. In Japan water and dragons are intrinsically linked so you will often find her accompanied by a dragon or occasionally a snake. She sometimes carries a biwa (traditional Japanese lute) to represent her patronage of the arts and her figure may be shown with a Torii, the gate found at the entrance of a Shinto shrine. Her origins are in the Hindu Godess Saraswati who represents similar things to the Japanese version and helps to maintain the balance of the universe.

Cherry blossom is a well known symbol of Japan, it is beautiful but fleeting, it represents spring, a time of renewal and reminds us of the fleeting nature of life.

Quail were and still are popular pets in Japan they were bred as songbirds and sometimes competed in singing competitions.