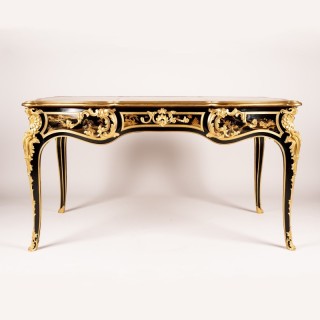 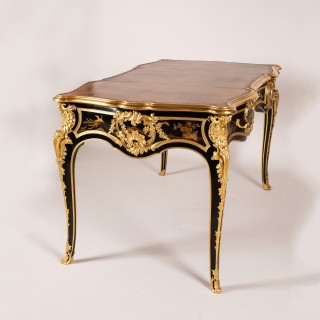 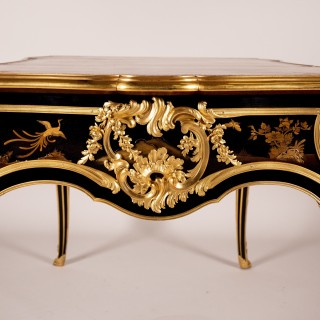 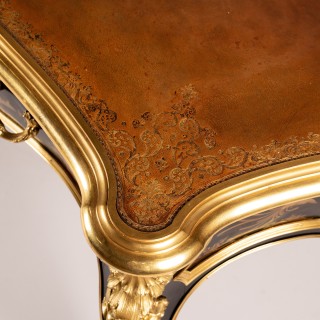 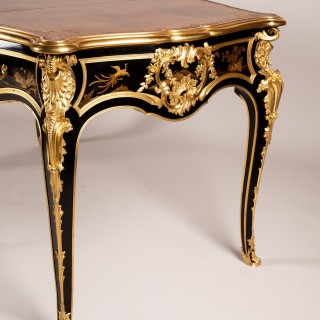 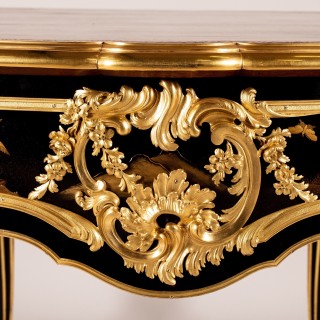 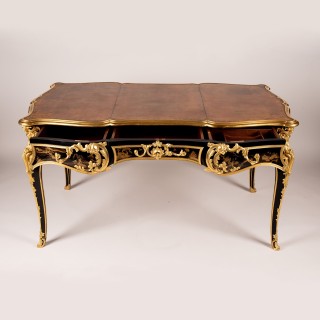 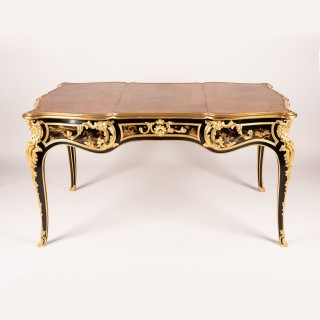 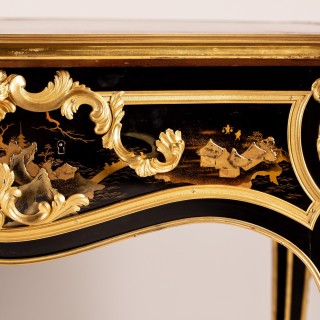 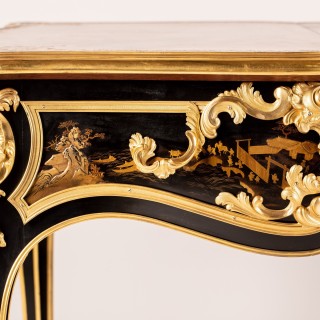 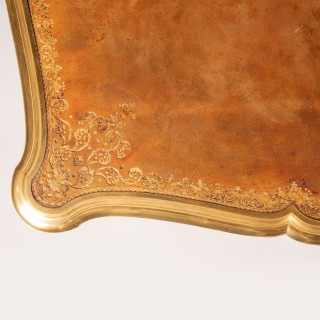 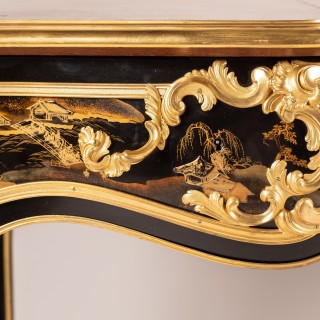 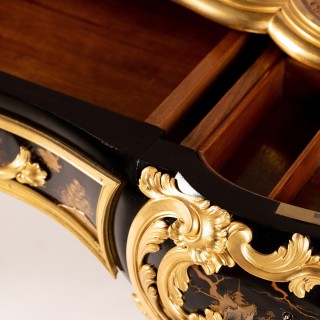 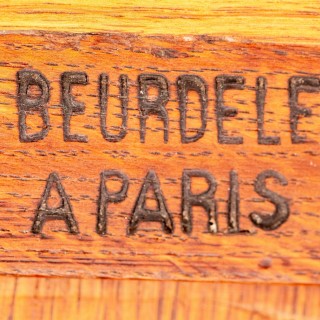 This extremely rare lacquer-mounted rendition by Beurdeley is documented in the archives, the only other known example having been made for his own personal use at home. The elegant serpentine writing table in ebony decorated with black & gold Japanese lacquer panels  and having extensive fine quality ormolu mounts; rising from scrolled sabots, with highly distinctive espagnolettes described as “chutes à coquilles” (cascading shells), the apron constructed sans-traverse housing three lockable drawers, with faux drawers to the obverse, dressed with rocaille ormolu mounts; atop, the shaped writing platform with brass guard edge and inset with a gilt-tooled morocco leather. Stamped by the maker “A. Beurdeley / A Paris.”
French, circa 1880

First designed by Nicolas Pierre Séverin around 1760 for the Abbé Terray, Minister of Finances to King Louis XV of France, the Louvre’s bureau plat is of larger proportions, perhaps lacking the intimate elegance of Beurdeley’s version. Other Parisian cabinetmakers, including Henry Dasson and Gervais Durand, made copies of the famous “bureau de l’abbé” throughout the nineteenth century, although veneered in wood rather than including lacquer panels.

The model is documented in the bronze ornaments sales catalogue of 1897, following the firm’s closure in 1894, where it is described as “bureau plat Louis XV, chutes à coquilles. Même modèle plus petit. Ministère de la Marine.”

The 1901 inventory of the Beurdeley residence on Rue de Clichy in Paris also mentions the model of bureau plat, and an image of the model can be seen in situ in the “salon des dessins.”

Jean Beurdeley (1772-1853), a native Burgundian, enlisted as a saddler in the Murat Regiment for the duration of the French Revolutionary War, and on leaving the army, set up in 1818 as a marchand-mercier in the Rue Saint-Honoré in Paris, moving later to The Hanover Pavilion in the Bvd. des Italiens, when he was joined by his son, Louise-Auguste-Alfred (1808-1882), who commenced reproducing copies of the very finest example of the ancien régime, and to the very highest standards, so becoming one of the major suppliers to the Garde Meuble Imperial, creating pieces for the wedding of Napoleon III and Eugénie, whilst acquiring commissions from many European Royal Households. An exhibitor at the Parisian Universal Expositions of 1855, 1867, 1878 and 1889.and was a notable medal winner. His son, Alfred-Emmanuel-Louis (1847-1919) joined the business in 1875, and the business continued to prosper, until its closure in 1895 – the remaining stock was disposed in five separate auction sales between 1897 and 1898.