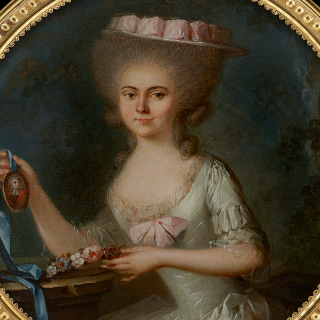 A Lady, wearing white dress trimmed with pale pink ribbon and matching be-ribboned hat, holding a portrait miniature on a blue ribbon next to a crown of flowers

Born in Mâcon, Montpetit’s father was a vitrier (glass maker) whose fortune he inherited in 1752. Montpetit worked in Bourg-en-Bresse and mainly in Paris, becoming a member of the Académie de Saint-Luc in 1766 (exhibiting from 1774) and held in high regard as a painter by Louis XV (1710–1774).[1] After inheriting his father’s fortune, Montpetit was able to devote his time to mechanical inventions and the arts. He received awards for horological innovations from the Académie des sciences from 1753, and the Bureau de Consultation awarded him 8000 francs for his ideas in 1793; he also published works on both art and engineering.

Montpetit wished to conquer the problem of fixing pastel but his best known invention was a method of applying oil paint to the inside of glass, a development of the technique of glass transfer painting from engravings, but intended to eliminate contact between the surface of the oil painting and the atmosphere for conservation reasons rather than as a method of painting quickly. This process he called eludoric painting, and distinguished from that of a verre fixé as seen in the present work.[2] Many of Montpetit’s miniatures in the eludoric manner have been lost. There is a miniature portrait of a boy (Massing, p. 364, fig. 4) in the Museum Boymans-van Beuningen, Rotterdam, and a signed portrait by him of Louis XV is reproduced by A. Kenneth Snowman (Eighteenth Century Gold Boxes of Europe, London, 1966, pl. 254).

This miniature, although a conventional fixé, may be associated with Montpetit’s eludoric painting. The subject is a romantic one as the sitter holds a portrait of a gentleman, presumably her betrothed, next to a crown of flowers which she may wear as his bride.

A Lady, wearing white dress trimmed with pale pink ribbon and matching be-ribboned hat, holding a portrait miniature on a blue ribbon next to a crown of flowers