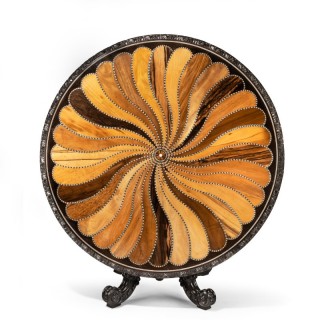 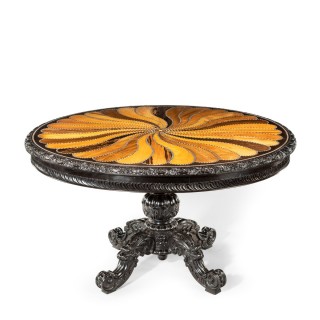 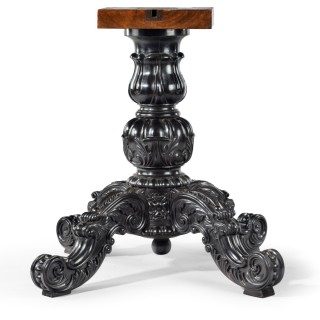 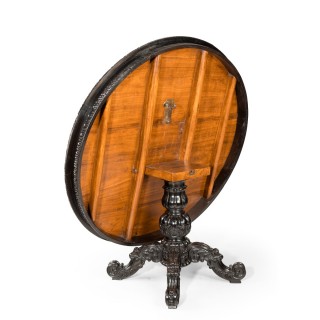 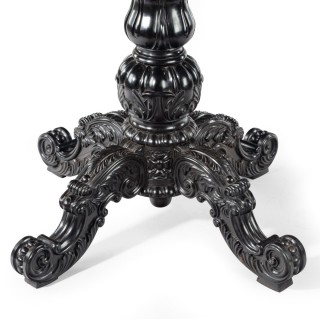 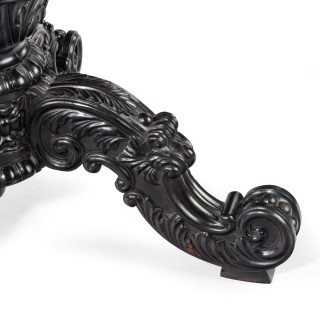 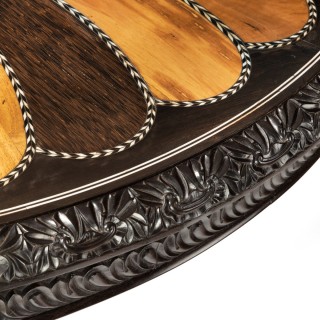 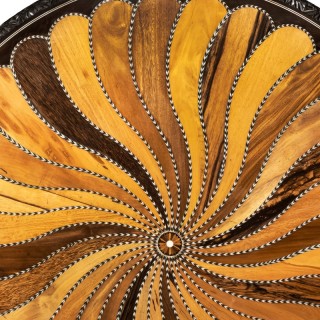 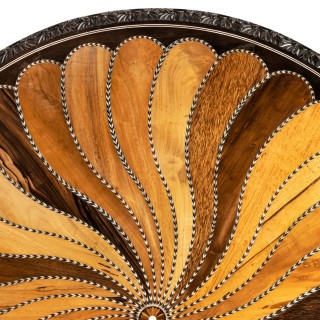 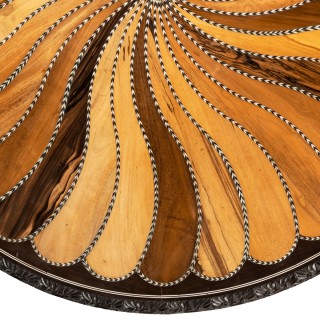 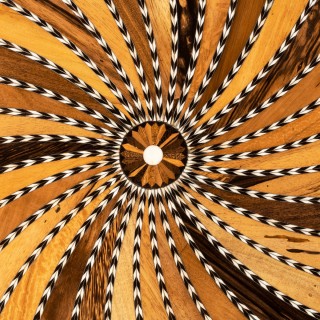 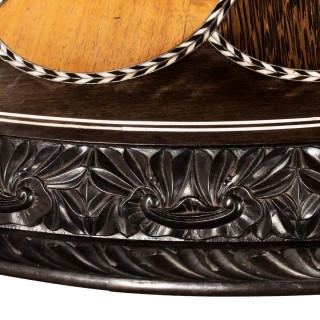 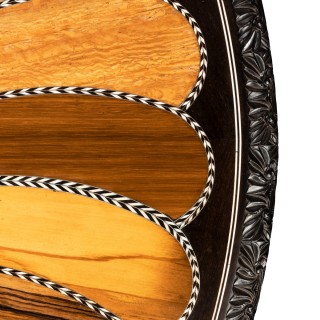 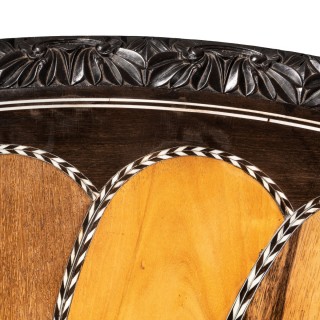 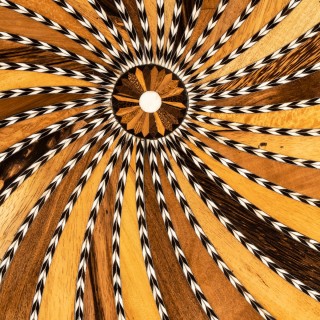 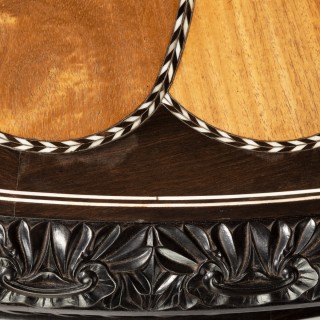 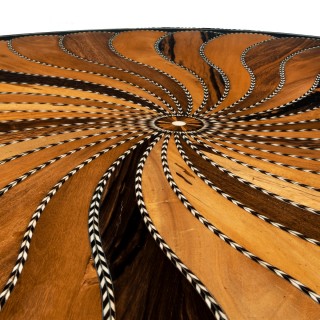 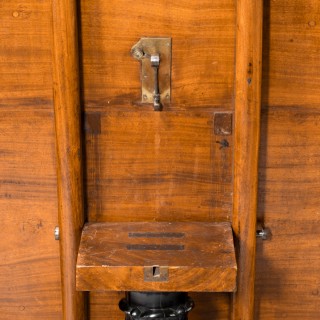 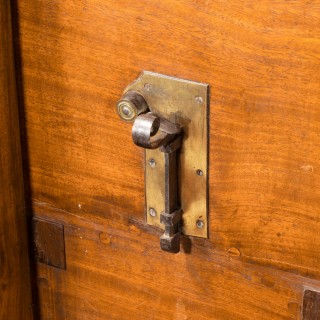 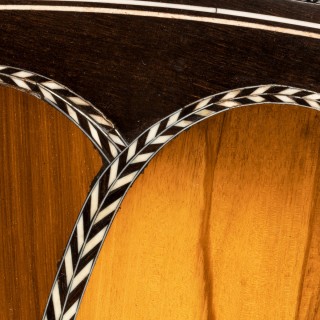 The four-foot-six circular tilt top with bone, pewter and specimen wood inlays of large swirling, radiating petals in 32 native Ceylonese timbers within feathered bands centred on a flowerhead roundel, the frieze with a stylised leaf-carved and gadrooned ebony edge, raised upon a solid ebony, lobed baluster with four S-scroll and leaf-carved legs, with the original disguised castors. Ceylonese (Sri Lankan), circa 1840.

Tables such as this are as identifiable with Ceylonese export furniture of the mid 19th century as specimen marble tops are with Italian Grand Tours and, in very many ways, they served a similar purpose-they were imposing pieces of furniture, clearly demonstrating the status of the owner whilst also suggesting an interest in travel and in the culture and craftsmanship of other countries. As a result, they were very desirable items.

The first documentary reference to a centre table of this sort is in an 1833 inventory of the contents of the Governor’s House in Colombo (preserved in the records of the Colonial Office in the National Archives at Kew). The inventory noted: ‘One Table with different woods of Ceylon, ebony feet’ . There are also various references in the diaries of English visitors to Ceylon. In ‘Ceylon and the Ceylonese (London, 1850), vol.II, pp.226-7) Sir Henry Charles wrote that craftsmen at Galle ‘manufactured those exquisite inlaid articles, which far surpass any specimen of Tunbridge ware that has yet been produced – ivory and various native coloured woods are inlaid upon ebony and as the designs are well defined, the effect produced is magnificent’ .

What is particularly fascinating about these tables is that they were regularly exhibited at the various international exhibitions of the 19th century and, from surviving accounts and catalogues, this particular style seems to have formed a centrepiece to the Ceylon Courts. Dr Robin Jones, in his article Furniture from Ceylon at International Exhibitions and World’s Fairs 1851-1904 (Furniture History Society 40, 2004) comments that, at the Universal Exposition in Paris in 1855, the top of a similar table to ours “laid out for visitors to the exhibition an all-encompassing view of the most visually- striking and useful cabinet-woods which the island yielded” . Accompanying the catalogue for the 1855 Exposition was a document titled The Catalogue of the Natural and Artificial Products of Ceylon and, on p.26, this document describes the 25 different woods inlaid into a specimen table top exhibited there. Half have native names and the others include the following English trsnlations: Cocoanut, Calamander, Ceylon Teak, Palmira, Bastard Ebony, Sappan, Iron-wood, Persian, Sattin, Nepera, Bengal Quince, Tamarind and Bombay black-wood. Calamander was apparently the most prized of all woods and that can clearly be identified on our table, along with Gabon ebony, teak and mahogany. When it comes to some of the more esoteric native woods, however, it is very difficult to make precise judgements.

Clearly, then, these tables were to be seen both as works of art and as representing the variety of fine furniture timbers available in the colony. They were, in effect, the calling cards of superior joiners and masters of inlay-in both wood and metal.

The popularity of these tables is clearly demonstrated by the references to them in other exhibition catalogues. One was exhibited in the 1862 London International Exhibition, another at the 1886 Colonial and Indian Exhibition and an example was also exhibited at the Paris Exposition Universelle of 1900 (see Dr Robin Jones 19th Century Carved Ebony Furniture from Sri Lanka: Suggested Methods of Interpretation , Regional Furniture Society, Volume X, 1996). That these tables were able to enjoy sustained popularity at a time when tastes in Victorian England were changing so quickly is a testament to their fine design and timeless appeal, something that is still evident today.

As Dr Jones demonstrates so well in both of his aforementioned articles, these tables, and indeed all export furniture, are additionally fascinating precisely because it is impossible to know what the craftsmen who made them thought of their work. Did they feel that they were a source of national pride, or did they see them as entirely removed from their own native furniture making traditions-pieces made for those who had no concept of true Sri Lankan taste? There is simply no way of knowing, but what is certain is that these well-proportioned and attractive pieces are instantly recognisable to connoisseurs and collectors and, as a result, the hard work and talent of the craftspeople who produced them will continue to be admired for generations to come. We are indebted to Christopher Coles for his research into this article.