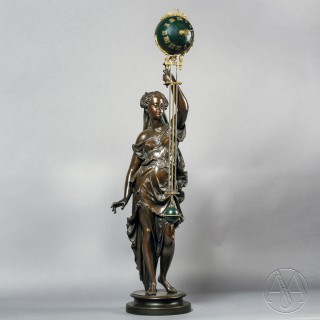 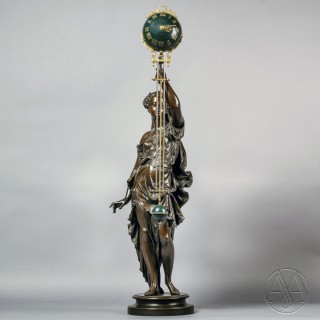 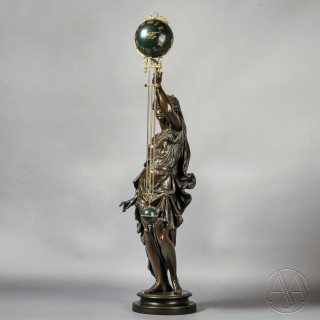 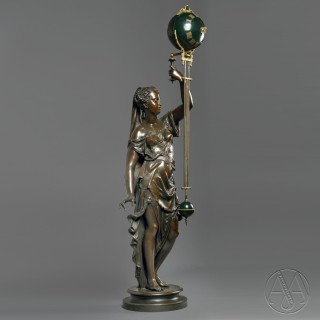 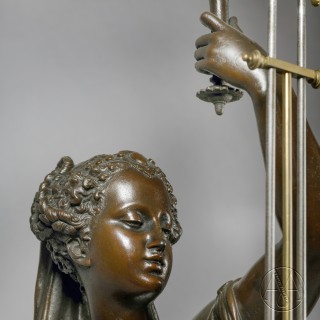 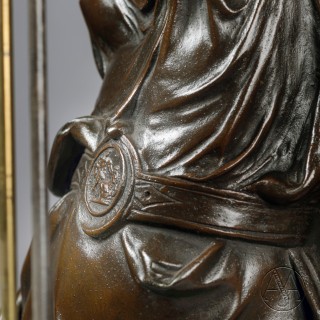 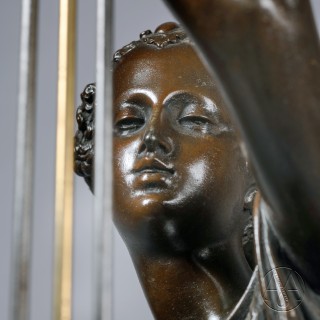 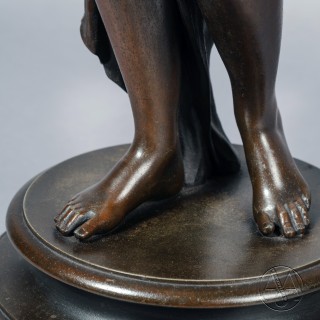 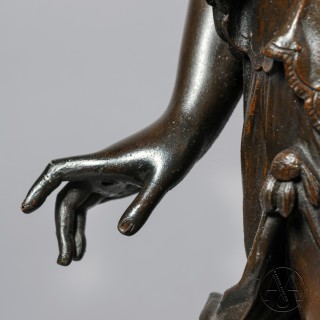 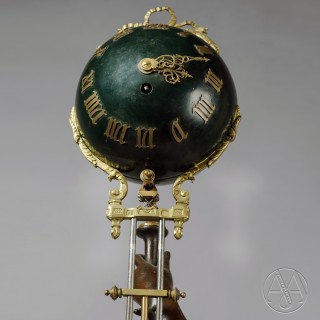 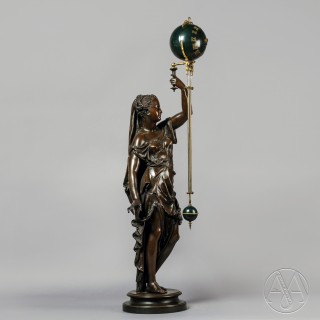 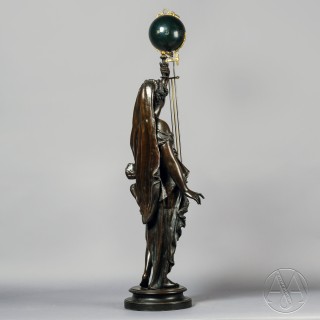 This large and imposing mystery clock standing at 127 cm (50 inches) high is modelled as a classical maiden in the manner of Albert Ernest Carrier-Belleuse. The figure holds aloft a rod in her left arm supporting spherical clock case with the hours marked in Roman numerals, forming the upper section of a grid-iron pendulum terminating in a smaller orb. The pendulum swings gently with seemingly no means to maintain its momentum.

Below the upper ball is the pivot point for the swing. Three delicate suspension springs provide the breakpoint. Below this are three rods that connect to the smaller ball. When the clock is running, this entire grid iron pendulum moves from left to right.

Albert Ernest Carrier-Belleuse (1824-1887), was an important Parisian sculptor who signed his work ‘Carrier’.

The sculptor Fauconnier trained Carrier-Belleuse before he entered the École des Beaux-Arts in Paris in 1840, where he studied under David d’Angers. He later abandoned this formal training in order to develop his interest in a more decorative, Romantic style – in which he showed a healthy independence. Carrier-Belleuse made his debut at the Salon in 1851 before moving to England, where he worked in the design shop at Minton’s ceramic porcelain works in Staffordshire until 1854. Here he trained under Léon Arnoux.

Upon his return to Paris in 1855 he embarked on a series of important pieces that included work at the Louvre, the Hôtel de Païva, the Opéra, the Hôtel de Ville and the Théâtre Français. As one of the most prolific and versatile sculptors of the nineteenth century, he made his reputation with the group ‘Salve Regina’, which was shown at the 1861 Paris Salon. His later works ‘Bacchante’ (1863) and ‘The Messiah’ (1867) won him medals and the Legion of Honour – the ultimate recognition.

In the last years of the Second Empire he executed many public commissions and was highly regarded by Napoléon III, who referred to him as ‘our Clodion’.

Carrier-Belleuse worked in every medium, both traditional and modern, even experimenting with galvanoplasty and electroplating. His combination of materials, such as porcelain for the features of his bronze statuettes, anticipated the chryselephantine figures of the turn of the century. In 1875 he was appointed Director of Works at the Sèvres porcelain factory. He employed a galaxy of rising young sculptors as assistants, who at one time or another included Rodin and Mathurin Moreau, though his own work showed little sympathy with the modern movement which Rodin was instrumental in developing. His bronzes include many busts of historic and contemporary celebrities, classical and allegorical figures, figures in period costume, nude statuettes, bas-reliefs and even sculptural staircases and interior decoration.