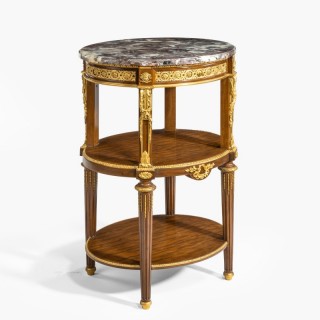 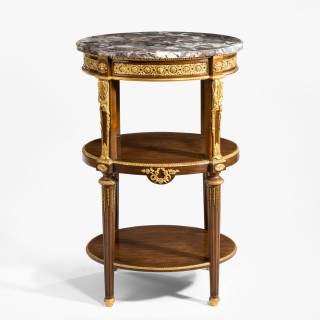 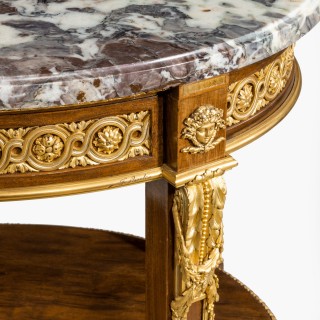 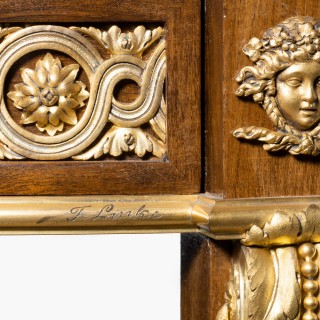 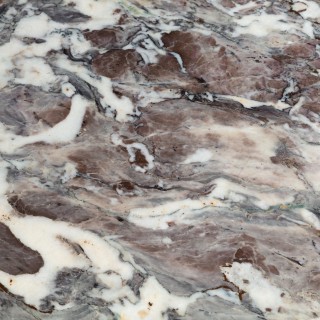 Constructed in mahogany and having a Fleur de Pêcher marble top, the three-tiered oval gueridon rises from gilt bronze toupie feet and rests on four tapering fluted columns, transitioning into quadriform upper pillars dressed extensively with ormolu. A single drawer set within the apron having guilloche-patterned gilt bronzes and masks of Apollo. Signed by the maker on the mount, “F. Linke.”
French, circa 1900

François Linke (1855-1946) is considered to be one of the finest ébénistesand bronziers of the 19th century at a time when the worldwide influence of French fashion was at its height.  He moved from Pankraz, Bohemia where he completed his apprenticeship under the strictest of training, to Paris in 1875, setting up shop in 1881 in the faubourg Saint Antoine and later with a showroom in the Place Vendôme. He attracted a wealthy international clientele, appreciative of the excellence of his work.

Specialising in the style of the ancien régime and modifying the proportions of the eighteenth century to suit the smaller Parisian apartments, he was an exhibitor at the Paris Exposition Universelle of 1900, where he was a Gold Medal winner par excellence for his extraordinary and innovative display. His worldwide reputation as a master of high individualism and inventiveness earned him the highest distinction of France, the Chevalier de la Légion d’Honneur.