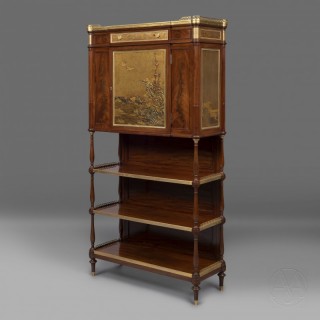 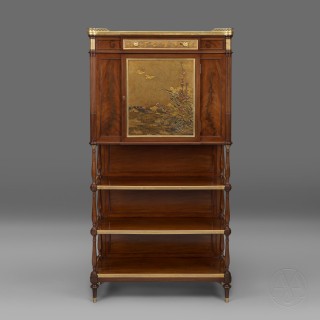 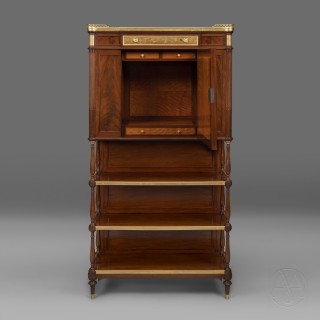 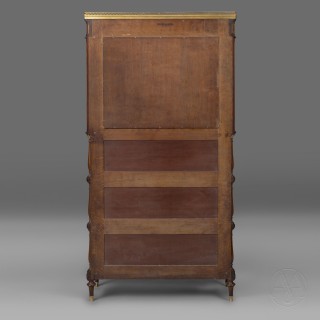 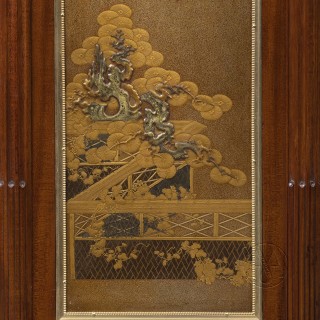 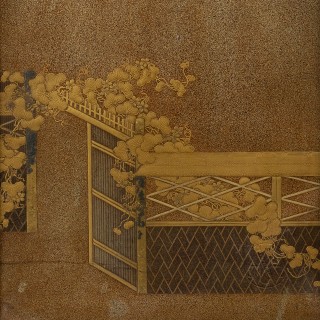 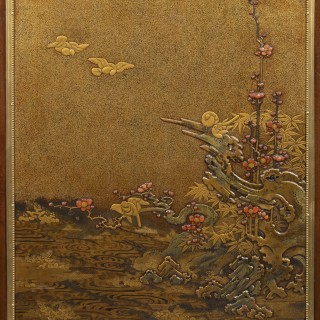 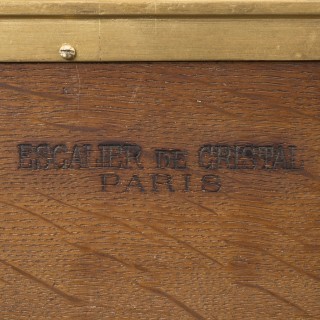 This elegant and sophisticated cabinet on stand has an upper section with a rectangular white marble top with three quarter gallery, above a frieze drawer and a central cupboard door inset with a fine hiramakie and takamakie Japanese lacquer panel depicting a landscape against an aventurine background, flanked by fluted half columns ; the sides with corresponding inset lacquer panels. The interior opening to a central recess with two upper drawers and a single lower drawer and a pull out slide. The lower open section with delicate baluster uprights and three shelves with bronze galleries, on turned feet with bronze caps.

Aventurine lacquer work or Nashi-ji is a form of Japanese maki-e that is frequently employed as a background to gold or black Japanned decorative elements. The technique so called as it resembles the sparkling quartz of true Aventurine is created by gold or silver flakes called nashiji-ko being sprinkled onto the surface of the object (excluding the design), on which lacquer has been applied. Lacquer is then applied and burnished so that the gold or silver can be seen through the lacquer. The name nashi-ji is thought to have originated from the resemblance that the lacquered surface bears to the skin of a Japanese pear, nashi.

L’Escalier de Cristal (1802-1923) was established by Marie Jeanne Rosalie Désarnaud-Charpentier, the daughter of a goldsmith from Châlons-sur-Marne, when she opened her renowned boutique in the Galerie de Valois of the Palais Royal in 1802. There she specialised in objects of great technical and aesthetic innovation, many composed entirely of crystal and gold plated bronze. What the previous century had done incorporating porcelain into objects and furnishings, Mme Désarnaud-Charpentier did with crystal in the nineteenth. Sadly very few of these crystal furnishings survive with us today.

Mme Désarnaud-Charpentier’s fame was secured by the success of her innovative suite of furniture at the 1819 exhibition of the Produits de l’industrie, where she was awarded a gold medal. This toilette suite was purchased following the exhibition by one of Escalier de Cristal’s most famous patrons, the Duchess de Berry, Louis XVIII’s niece, and was subsequently installed in her country residence, the Château de Rosny-sur-Seine.

This exhibition, followed on from her success at the Paris 1801 exhibition. The competitive character of the exhibitions led many manufactories and maisons de luxe to create objects of increasing daring and originality; despite this for the judges and visitors the technical innovation of Escalier de Cristal’s creations would have been a revelation.

In 1840, Pierre-Isidore Lahoche acquired L’Escalier de Cristal; joined later by his cousin Emile-Augustin Pannier, the company would become in 1867 Lahoche, Pannier et Cie. At the end of 1872, Pierre-Isidore Lahoche retired from business leaving his son-in-law in charge of the company. The boutique moved to the centre of Paris, at the corner of rues Auber and Scribe, a few steps away from Opera Garnier.

By 1885 the company was known simply as Pannier et cie, managed by Georges and Henri Pannier, sons of Emile. Henri Pannier was the art director whereas Georges took care of the finances. In the last decades of the 19th century the company widened its repertoire to include exceptional furniture in Louis XV and Louis XVI revival styles and ground breaking works by designer-ornamentists such as Edouard Lièvre. In the tradition of the 17th and 18th century marchand-merciers, they would collaborate with the finest bronziers, ebenistes, lacquers and painters of the day creating objects of unparalleled luxury and embracing sophisticated modernist styles such as extreme oriental and japonisant.

The company won multiple awards and medals at national and international exhibitions, including bronze medals at the Universal Exhibitions in London in 1862, and in Paris in 1867 and 1878. They were awarded a gold medal at the 1900 Paris Exposition Universelle.

The large number of objects that remain today in the possession of European Royal households, that were made by Escalier de Cristal, attests to the success and reputation the company achieved. Pieces also remain in the collections of the Louvre and Musée D’Orsay.