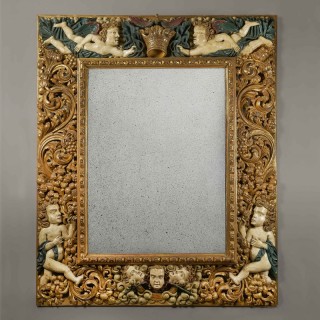 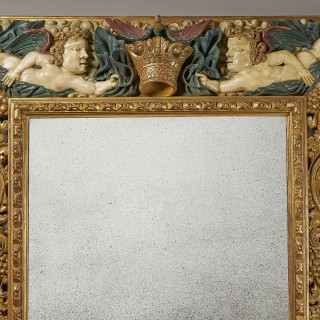 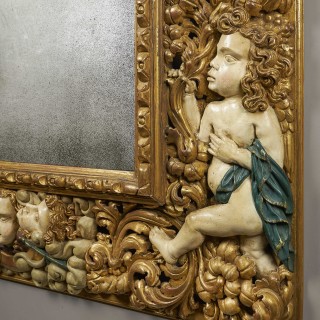 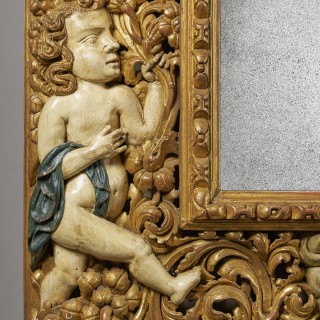 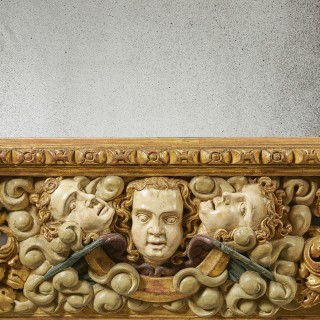 This magnificent carved and gilded mirror frame represents an interesting fusion of late medieval sculptural style with contemporary Baroque ornamentation executed in a flamboyant manner characteristic of south German and Austrian design in the seventeenth century. The bold and virtuoso carving of the scrolling acanthus leaves, held up by two entwined putti in either corner, along with the billowing folds of drapery of the baldachin above, reflect the influence of Italian Baroque furniture, where they were used in console tables and mirrors. Likewise, the profligate use of the putti as key figures in the decorative composition is also typical of Baroque art. The triple-headed putti amidst clouds in the bottom border and the dove surmounting the coronet above, meanwhile, are motifs common in Italian art from the early Renaissance onwards.

The stylised anatomy of the figures, on the other hand, betrays the lingering influence of northern Gothic sculpture on the arts of this region, with their long foreheads, elongated torsos and squat legs showing a certain removal from classical proportions. For related figures from south Germany of a similar date in the early seventeenth century, see, for example, the pair of wood putti attributed to Hans Juncker (c.1582-1624), sold at Sotheby’s London, 3rd December 2019, lot 58.

For a related mirror from Germany of a slightly later date, which also shows a pair of putti on either side entwined amidst luxuriant foliage and winged putti on the upper border bearing a shield below a crown, see Heinrich Kreisel, op. cit., figs 673-74. Further examples with similar elaborately carved acanthus leaves and striking polychrome from south Germany or Austria are illustrated in Kreisel, op. cit., fig. 609 and in Sotheby’s, Pelham: The Public and the Private, London, 8th March 2016, lot 49. Another mirror from Bohemia with profusely carved acanthus leaves is illustrated in Kreisel, op. cit., fig. 678, indicating the present mirror could also have a Bohemian origin.

Good overall condition. A few chips to the gilding. Some of the polychrome paint is possibly later. The mirror plaque is a modern replacement in foxed antique style.