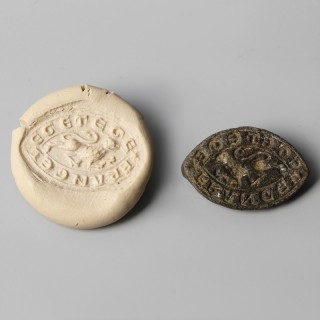 A vesica-shaped, bronze Medieval seal matrix, featuring a passant leopard motif. The central design shows the leopard with his forepaw raised and all other paws resting on the ground. The legend framing the seal reads in Latin: FRANGE LEGE TEGE.

The passant leopard was a variant of the rampant lion motif, used frequently in heraldic imagery. In contrast to our leopard, the rampant lion would feature both forepaws raised and was symbolic of courage and bravery.

In Medieval times, the leopard, as an animal, did not have good connotations – it was known as cowardly and two-faced. However, as a variant of the rampant lion, the passant leopard was featured on seals and used extensively from the 14th century.

The Latin legend translates to Break, Read, Cover. Seals were originally used as a device for making an impression in wax, clay, paper, or some other medium. Their original purpose was to authenticate a document. In this instance, the Latin legend is instructing the reader to break the seal, read the letter and cover its contents. The word cover could literally mean close the letter, but it could also be instructing the reader to keep the contents secret.