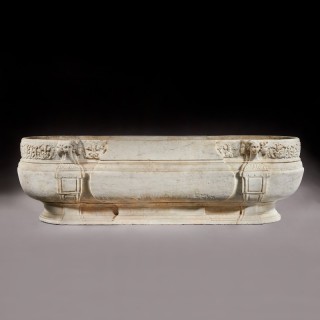 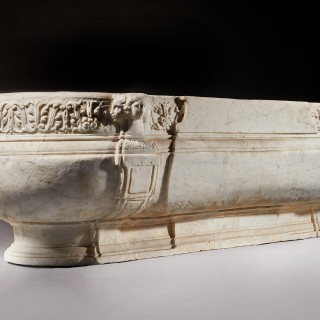 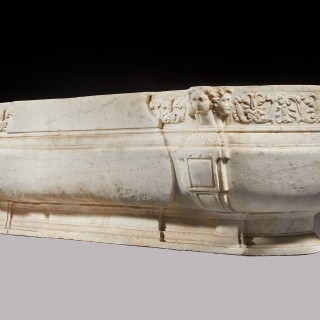 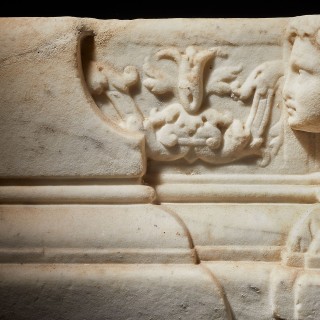 As a work of architectural-sculpture of the highest quality in conception and execution, this carved marble water basin bears all the hallmarks of Rome during the Mannerist period. The incorporation of sculptural elements into its grand architectural structure – namely, the pair of classical three-headed herms surmounting the pedestals on each side and the elaborate flowering-bud motif carved along the rim – epitomises the creative spirit of Mannerism in the mid-sixteenth century, as opposed to the more austere classicism of the fifteenth century.

This ornamental marble receptacle cannot have served as a fountain-basin, which it looks like at first sight, for its rim does not project enough to cast any overflowing water clear of the carvings below. On the contrary, the relatively narrow rim would have enabled a horse to lean forward easily over it in order to slake its thirst and the roughly-hewn back of the basin clearly indicates that, for much of its life, it was placed against a wall and only approached from the front. The elegance of this vessel that served the humble – but vital – role of a horse-trough indicates the wealth, social standing and sophistication of whoever commissioned it.

By the end of the sixteenth century, Giacomo della Porta was regarded as the first and principal architect of Rome. Della Porta is most remembered for completing several works initiated by Michelangelo and Jacopo Vignola, including the completion of the façade and steps of the Palazzo Senatorio at the Capitoline, the construction of Il Gesù and the Palazzo Farnese after Vignola’s death in 1573, along with the ongoing building work at St Peter’s, including the completion of its dome, designed by Michelangelo. Giacomo is thus regarded as a highly practical architect, whose style, as Anselmi describes, was influenced both by Michelangelo’s Mannerism and Vignola’s classicism.

For the next fifteen years, Giacomo and his workshop were busily engaged in the design and carving of fountains for the new aqueducts and their channels, including those in Piazza Navona (from 1574), Piazza Colonna (from 1575), Piazza della Rotonda (begun in 1575) and Piazza San Marco (from 1588). During this time, the della Porta workshop was also involved in the execution of basins, chalices and ornaments designed without regard to specific sites, suggesting a large operation which supplied vessels to private patrons, as well as for public projects. It is the relationships of form and motif in several of these fountains by Giacomo della Porta, together with the fact that his large workshop was a prolific supplier of water basins during this period in Rome, that permit the attribution of the present vessel to this important architect-sculptor.

This brings us to the related fountains by Giacomo della Porta, from whose thriving workshop this water basin probably originates. Qualified as the first fountain of modern Rome is one that he designed in 1572 for the centre of the busy Piazza del Popolo, the huge open space inside the all-important gate into the city from the north, for popes and pilgrims alike. Its appearance in 1665 is known from another of Falda’s engravings, though the fountain was removed in the early 19th century and was finally erected in Piazza Nicosia in 1950. Though the sides are plain, their profile, with indented architectural mouldings at ground-level and a bulbous central zone above, is similar. The same may be said of a fountain, qualified by D’Onofrio as the most beautiful in Rome, that Giacomo della Porta created only two years later for Piazza Colonna, to surround the pedestal of the Column of Marcus Aurelius, with its spiralling narrative of Roman conquests. Its basin is articulated by occasional herms with lion’s heads, running up from the ground through the various mouldings and projecting only slightly, which provide the inspiration for the herms on the present basin.

These parallels serve to support the usage of the present rare and splendid receptacle, while the analogies with the magnificent fountains in Rome by Giacomo della Porta suggest that it is likely to have been designed by him and executed in his workshop by a team of skilful stone-carvers.

We are grateful to Charles Avery, Ph. D, for his research on the present basin, which is available on request.