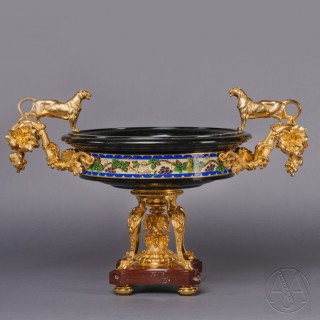 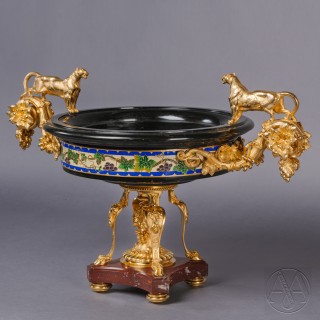 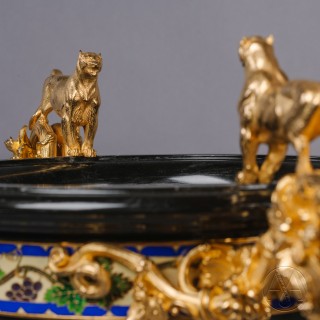 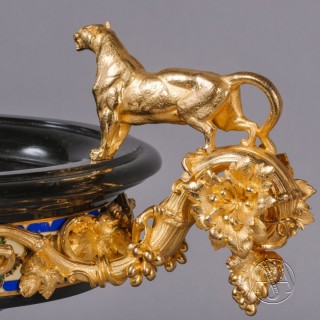 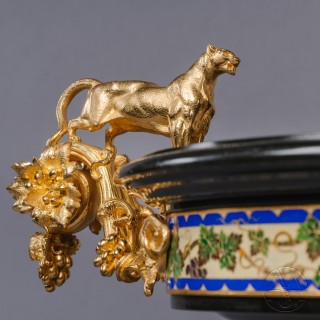 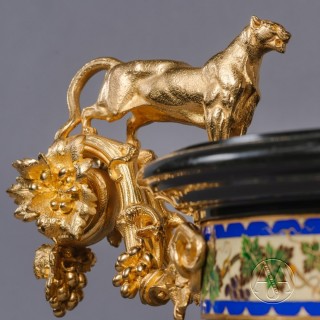 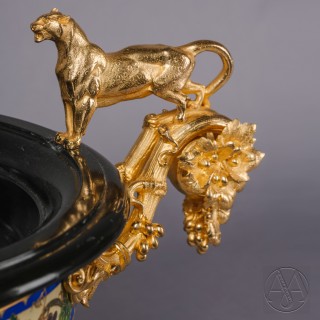 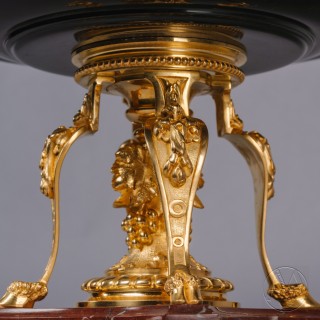 This impressive tazza or centrepiece has a shallow Belgian Black marble bowl enriched with a Champlevé enamel band of fruiting vines, the handles finely cast as scrolling vines surmounted by facing Leopards which assertively stalk the rim of the tazza; the bowl is raised on a vine cast spreading column flanked by hipped legs which terminate in hoof-feet, the whole raised on a shaped red marble plinth and circular cast feet.

Louis-Constant Sévin (1821-1888) was one of the most important French ornamental sculptors of the second half of the nineteenth century. He began his training at the early age of thirteen, when in 1834 he was apprenticed to the Parisian sculptor Antoine-André Marneuf. In 1839 he left Marneuf in order to join forces with the sculptors Phénix and Joyau, with whom he began designing objects for famous silversmiths including François-Désiré Froment-Meurice, Jean-Valentin Morel and Henri Duponchel.

He fled to London during the 1848 Revolution and there worked at Morel’s recently opened studio on New Burlington Street. Under Morel’s auspices, Sévin designed many pieces that were presented at The Great Exhibition of 1851. Returning to France in 1851, he began designing porcelain models for the factories of Jouhanneaud and Dubois in Limoges, many of which featured at Paris’s 1855 Exposition Universelle.

In 1855, Sévin took the position of ‘sculpteur-ornamentiste’ with Ferdinand Barbedienne (1810-1892), who had established one of the most highly esteemed bronze casting foundries of the nineteenth century. Sévin was to spend the remaining twenty-three years of his life there providing plans and instruction to the company’s craftsmen. Executing over two thousand designs in this time and often using novel techniques, his objects were some of the most stylistically diverse and innovative in the Barbedienne foundry and indeed in the wider production of decorative arts in France.

Sévin regularly received commissions from European nobility and royalty, and his pieces were frequently displayed at the Great International Exhibitions of the period. His most prestigious commissions include his work for the chapel and tomb of Prince Albert at Frogmore House in Windsor, his bronze work at the Hôtel de la Païva in Paris, and the candelabras designed for the Kremlin. He was to achieve great recognition in his own time and was awarded many medals for artistic excellence.