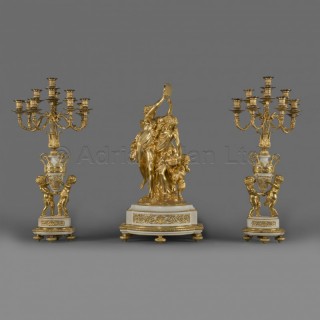 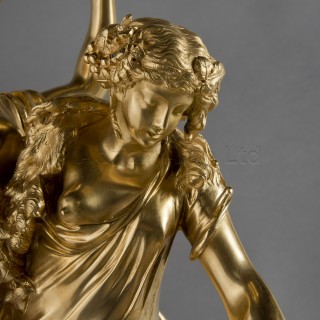 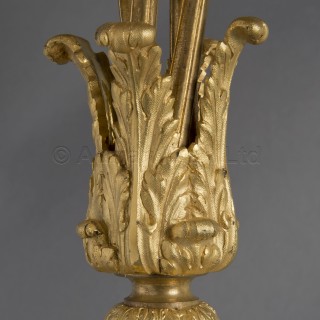 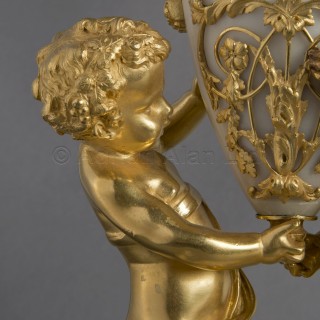 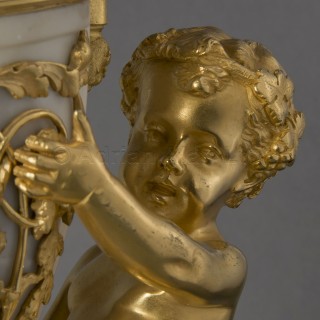 The garniture comprises a finely cast figural group of two bacchantes one holding aloft a tambourine, flanked by an infant faun, pipes and thyrsus at their feet, the naturalistic base with cast signature ‘Clodion/1762’, over a stepped white marble base with gilt-bronze foliate frieze. The candelabra en suite are cast with foliate branches and acanthus-wrapped stems, above a white marble urn-form supports held aloft by two putti, on confirming white marble bases.

Enriched with finely chased figures and evocative of the finest works of art created during the Second Empire, this sumptuous garniture references the art of the Ancien Régime including the neoclassical sculptures of Clodion.

Clodion
The son-in-law of sculptor Augustin Pajou, Clodion, (Claude Michel), (1738-1814), trained in Paris in the workshops of his uncle and Jean-Baptiste Pigalle, the most successful sculptor of the time. After winning the Prix de Rome, he moved to Italy, sharing a studio with Jean-Antoine Houdon and studying antique, Renaissance, and Baroque sculpture.

In 1771 Clodion returned to Paris, where he continued to produce mostly in terracotta. He also worked with his brothers in other media, decorating objects such as candelabra, clocks, and vases. Drawing primarily from pagan antiquity, he created light-hearted terracotta sculptures that epitomised the Rococo style. Late in his life, when Neo-classical works were more popular, Clodion adjusted his style and worked on major public monuments in Paris.

Little is known about the French clockmaker and bronzier Raingo, who almost certainly apprenticed in Paris circa 1790. He moved to Belgium, circa 1800, probably for political reasons, and from the signatures on some of his clocks, it is known that he worked in Gand and Tournay. Later, in 1823, he is recorded as being clockmaker to the duc de Chartres.

The company became Raingo Frères in 1825 and thereafter clocks bear their signature with various Paris addresses. They had a workshop workshop on Rue Vielle du Temple in 1829, and from 1840 to 1850 in Rue de Saintonge. After 1860 they moved again back to Rue Vielle du Temple where they started sell bronzes. noted for the quality of their gilding and chasing.

The firm exhibited at many of the important exhibitions of the second half of the 19th century, including London in 1862, and was known for the fine quality of its ormolu in particular their superb gilding and chasing.