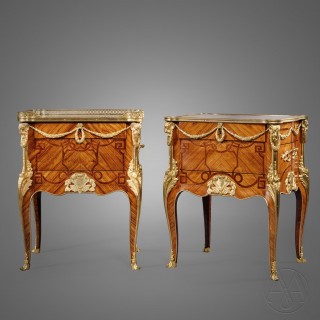 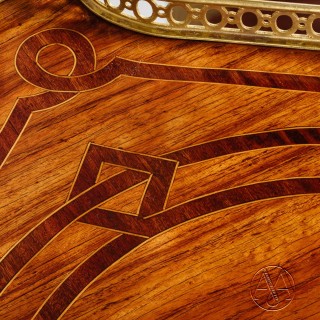 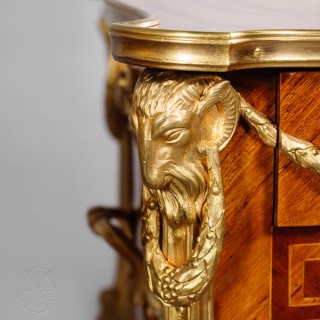 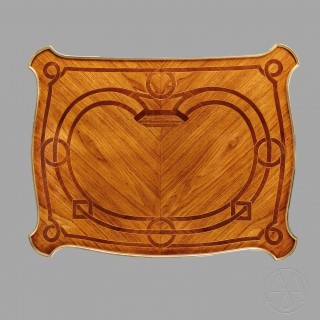 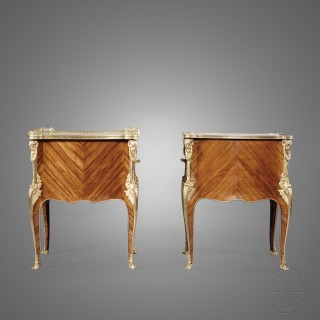 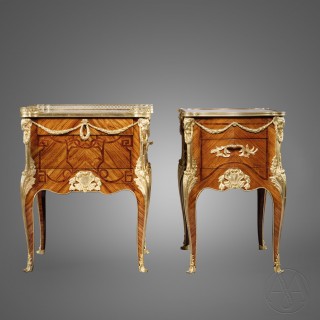 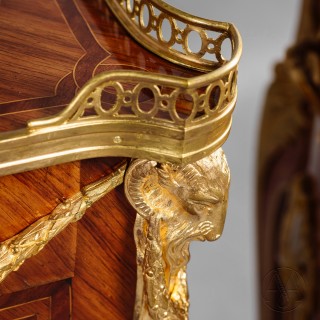 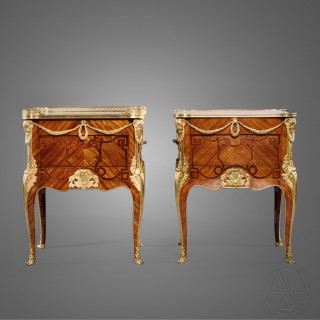 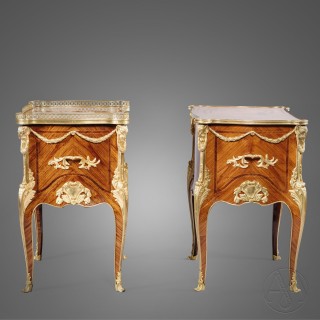 A Fine Near Pair of Transitional Style Gilt-Bronze Mounted Marquetry Side Cabinets, After The Model By Jean-Francois Oeben.

With their distinctive shape and rams’ head masques, these impressive side cabinets, or tables de toilette, are based on the celebrated model by the ébéniste du roi Jean-François Oeben (1721-1763), now preserved in the Wallace Collection, London.

Purchased by the 4th Marques of Hertford at the Earl of Clare sale, Christie’s 16 June 1864, the eighteenth century model by Oeben was much celebrated in its day and widely exhibited. It was included in the important Musée rétrospectif exhibition held in Paris in 1865; at the Petit Trianon in 1867 and Bethnal Green 1872-7, before entering the Hertford House inventories in 1890.

Important exhibitions such as the Musée rétrospectif were of immense influence, aiming to satisfy a widespread demand for, and interest in, furniture and decorative arts of the ancien regieme. They were frequented by many of the most import ébénistes of the period and fine nineteenth century examples of this cabinet were created by some of the most important Parisian makers of the day.

Originally from the Rhineland, Jean-Francois Oeben (1721-63), emigrated to Paris in the late 1740’s. From 1750-1754 he worked as an independent artisan in Charles-Joseph Boulle’s workshop and rented a mezzanine at the Louvre. In 1754, the year of Boulle’s death, Oeben was granted the title of ébéniste du roi and moved to the Gobelins.

His clientele included the Garde-Meuble Royal, the Duc D’Aumont, Madame de Pompadour and the Ministers Choiseul and D’Argenson. He was particularly renowned for his mechanical furniture and in 1760 was granted the title of ébéniste mécanicien du roi. His most famous work was an extraordinary mechanical roll-top desk the Bureau de Roi created for Louis XV and now at Versailles. After his death, his workshop was run by his widow who married his most accomplished apprentice, Jean-Henri Riesener.