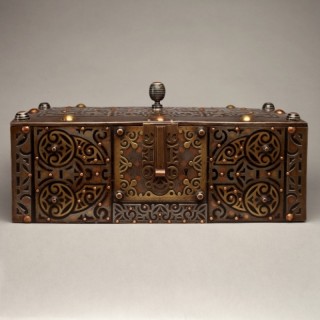 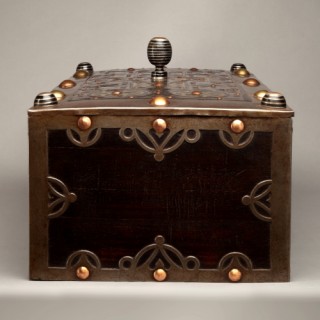 A wooden rectangular coffer densely overlaid in geometric shapes including arcs, lozenges, hearts and leaf motifs; the stylized symbols are cut into the iron and overlaid in brass and copper, affixed with metal studs. The lock plate and tongue are also chased and the knops have an alternate black and silver design finished to the top with copper.

The nomadic Maures travelled throughout an area now politically divided into Mauritania, Western Sahara and Senegal, carrying their possessions on their camels. Wood coffers with iron frames and metal locks were traditionally made by the blacksmiths in which to store and carry their tools and were adopted for other possessions. The tea ceremony is of the utmost importance in Mauritania and as such has a number of precious objects associated with its preparation so coffers would be made for their transportation. Holy books too required a sturdy locking box.

The heat of the sun is so intense in this area close to the Sahara that the smiths would work at night to extract iron from the ore using wood imported from Senegal and Mali. The women would attend them through the night providing the water needed in the forging of the metal. The long process of producing the materials needed to construct the coffers, together with the creativity of their design, meant that they were highly prized objects and wealthy buyers would travel long distances to secure such a box and hold a celebration on taking possession.

The height of this oeuvre when these densely decorated and highly artistic coffers were made lasted for only a century, approximately between 1870 and 1970 after which time the import of cheaper metal boxes sounded the death knell for this, one of the most important traditions of the Maures.
The American Museum of Natural History has a similar although less decorative example.