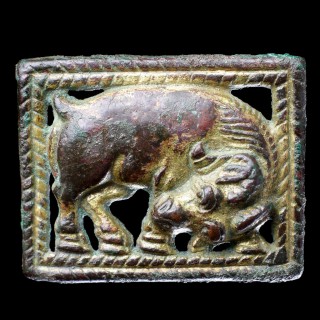 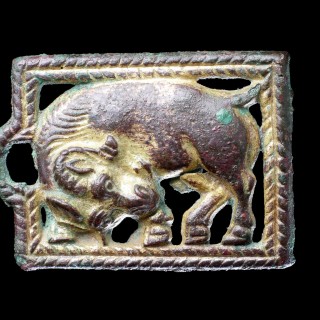 Bronze casting of high quality was the main metal technique used across the Eurasian Steppe with belt ornaments being the most distinctive artefacts produced. They were considered necessary regalia and decorated with visual symbols that identified the owner’s clan, rank and prestige. This concept differed from the Chinese belt hook which indicated power and wealth, not clan and rank.
Found in both North China and Inner Mongolia, the use of the animal form was also amuletic, imbuing the owner with the prowess and powers of the animal depicted. Herding, hunting on horseback and some small scale agriculture characterised the way of life for the pastoral nomads, and the art they produced reflects the animalistic culture that evolved over the centuries. Portable, lightweight bronze belt plaques, chariot fittings and other objects of personal adornment display skilled craftsmanship with highly abstract designs featuring both wild and domesticated animals, as well as dragons and other mythical creatures. Trade, intermarriage and warfare between the nomadic peoples and their settled Chinese neighbours led to a complex interrelationship that contributed over time to the cultural development of both groups.